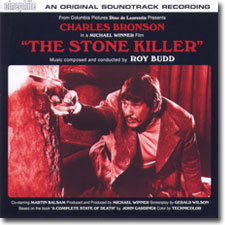 It's a real coup when an entire Roy Budd soundtrack is reissued because too often either shoddy compilations come out or remix projects (or in some cases both), leaving a slew of tasty Budd music to wallow in the vaults.

Best known for his soundtrack for Get Carter (the 1971 original version with Michael Caine), it's taken too long for more full Roy Budd soundtracks to get reissued. And in the case of The Stone Killer (soundtrack to the 1973 Michael Winner film starring Charles Bronson), there's plenty reason this should have come out sooner not least of which is the fact this soundtrack wasn't even originally released at the time of the movies release.

The Stone Killer is divided up into 3 types of sounds - groovy, jazzy and sinister sounding. Groovy titles include the opening Main Titles theme which starts with an ominous melody (which is used throughout the whole soundtrack), but then has some sweet electric moog keyboards, funky synths and a loping backbeat.

It's understandable why compilations spanning his entire career would make more sense since much of his soundtrack work is of the scene setting type. It's also understandable why remixers would want to get their hands on his music, because there are pockets of music, mere snippets often, that appear in his scores which pointed the way to much of the modern music of today. But the only way to do his music true justice is to issue the soundtracks in their entirety, as Cinephile has done here with The Stone Killer.

The more sinister sounding side of The Stone Killer is presented with M3 (SK 1) which starts out with some military styled percussion, low stand up bass lines, and dreaded strings and horns. For a short burst of down tempo rhythms, check out the incredible break between 38 seconds into the track til 45 seconds in, and you will see what I mean about the short bursts of forward thinking Roy Budd music that make samplers drool.

M5 (SK 7) (the next track) seems to flow right from M3 (SK 1) perfectly and keeps the sinister feeling going. Too Late has the main melody played in a most sinister fashion with various seething sound effects for good measure. The Graveyard takes that sinister feeling felt in Too Late even further with mind bending results. And finally, M5 (SK 10) rounds out the soundtrack, ending by combining much that came before it with a resounding, bell tolling, conclusion.

Roy Budd in the gullbuy: