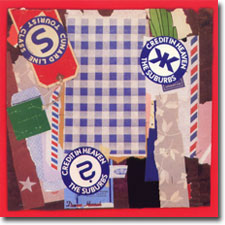 Credit In Heaven was the 1981 second record by The Suburbs, following up their debut LP In Combo.

The Suburbs were a Minneapolis post-punk band that formed out of the punk band Suicide Commandos. Their sound was sophisticated, and their live shows were enormously popular.

The Suburbs broke the mold on Twin Tone by releasing their second LP as a two LP set. The record had a lot of variety in the songs

Moving onto the second LP (now CD) in the set, the feel is the same as the other disc. The second disc is not an out takes, live, or rarities disc - like The Clash did with London Calling, the second record is more fully formed studio work, with Music For Boys providing the highlight, Dish It Up coming in as second favorite, and the awesome title track closing out the set in wonderful style.

The Suburbs in the gullbuy: