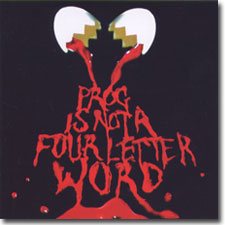 Andy Votel from Twisted Nerve has been mining the European psychedelia, Krautrock and funky folk with his compilations like Folk Is Not A Four Letter Word and Songs in the Key of Death and this time he centers his attention on European Prog rock from the 1970s. And in this case, as with his previous compilations, we are talking obscure prog rock where even collectors might not know most of the groups and artists found here.

Votel has dug up tracks from the far reaches of Europe including Italy (Pozzo Del Pichio), France (Visitors, Philippe Besombe and Jean Claude Vannier), Hungary (lles), Korea (San Ui Lim), England (Egg), Turkey (Baris Manco and 3 Urel), Poland (Breakout and Czerwone Gitary), Wales (Bran), Germany (Embryo), Yugoslavia (Drugi Nacin), and Czechoslovakia (Martin Kratochvil and Jazz Q). Only a few of these I question as true prog rock, and only a few are real clunkers. What's great is some of these artists' full length cds have started to get reissued recently, so if you like this taster you can dig even deeper (with groups and artists like Egg, Embryo, Visitors, and Jean-Claude Vannier).

The compilation starts out with the Italian group Picchio Dal Pozzo's Merta which oddly is nothing like what we think of when we think of Italian prog from the likes of Goblin (the group who did many prog influenced soundtracks for Dario Argento). Instead Merta is an atmospheric, symphonic jazz track with some Stockhausen influence.

Jean-Claude Vannier worked with Serge Gainsbourg on two of his classic early 70s albums - Histoire de Melody Nelson and the soundtrack for the film Cannabis. Le Roi Des Mouches is taken from L'Enfant Assassin des Mouches which was recently reissued by Finders Keepers, and is one of the best reissues in recent memory. Le Roi Des Mouches is sitar drenched orchestration with a whacked out melody.

Philippe Besombe's Hache 06 has a wah-wah jazzed out moodiness to it with flanged guitar. Besombe is best known for his group Hydravion, but three of his albums, including Libra (from which this track is taken), Cesi Est Cela, and Pôle were reissued by Mio Records, which is sadly now defunct.

Illes from Hungary offer up Nem Erdekel, Amit Mondsz which is more of a post garage rock synthy track with a Beatlesque melody; and Korea's San Ui Lim offer up Frustration a mysterious, keyboard-led track. Neither of these are overtly prog rock, but both are pretty good.

Egg is probably one of the groups prog rock fans have most heard of on this compilation since they are from the UK and feature Dave Stewart (not the one from the Eurythmics). Their Fugue In D Minor is a classically influenced track that sounds like The Nice or Procol Harum. Dave Stewart later worked with his wife Barbara Gaskin covering Lesley Gore's It's My Party that made it to number one in the U.K. charts in the early 1980s.

From Turkey we get Baris Manco's Lambaya Puf De which combines a traditional Turkish music with zither and a progged out mysterious vocal.

The couple of tracks from Poland are both rhythm heavy tracks. Breakout's Poweidzielismy Juz Wszystko has a tough rhythm with female vocals and dabs of flute and throbbing bass while the drum heavy hard rocking Coda by Czerwone Gitary has some devilish synths.

I wasn't all that crazy about the falsetto vocal in Bran's Breuddwyd. I wonder if this Welsh group might have more to offer since they're also featured on the Welsh Rare Beat: Lesser Spotted Welsh Obscurities From The Original Sain Back Catalogue on Finders Keepers.

One of my favorite finds on this album was German group Embryo's The Music Of Today which has some great agitated guitar and a pulsing rhythm with a King Crimson type vocal. They sound like a group worth digging into, even if they are more rock than Faust or Can.

Andy Votel in the gullbuy: