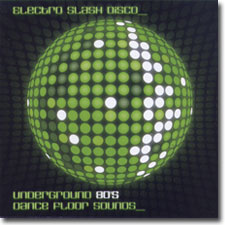 Electro Slash Disco is a compilation of underground dance music made just after the fall of disco, when outcasts of punk brought the DIY sensibility of punk into disco-oriented beats with latin percussion and electronics.

The two tracks that you CAN'T lose with are On The Grid by Lime and Dirty Talk by Klein & M.B.O. Both have appeared elsewhere (in fact, both appear on The Dark Side of Disco), but they are classic and wonderful tracks.

Rockers Revenge's cover of Eddy Grant's Walking On Sunshine is a good track, as long as you are not expecting the Katrina & The Waves song of the same name when you put it on.

Soho's Hot Music sounds like it foreshadowed Madonna's Music, and has a bebop jazz feel to it that is different from every other track on the comp.

There are enough tracks you have never heard to make this a justify able purchase, but I doubt you will be playing this CD much after you have heard it a few times.