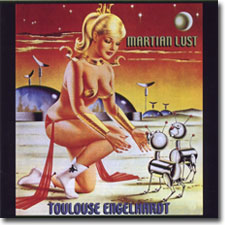 Martian Lust is the long awaited follow-up to Toullusions by guitarist extraordinaire Thomas L. Engelhardt (aka Toulouse Engelhardt) from the South Bay area of Los Angeles. It took 20 years in the making, but Martian Lust was finally released in 2004 and is a collection of Toulouse Engelhardt's surf meets sci-fi guitar playing on the Mosrite guitar. For awhile this album was only available at his shows, but finally the cd has made it into stores.

Toullusions was an album ahead of its time when it was first released in the 1970s, with John Fahey's Takoma Records unable to handle the popularity the album garnered, leaving Engelhardt frustrated with the music business. Opting for a career as a professor of botany instead, Engelhardt waited 20 years before returning to the music business. Martian Lust, the follow-up to Toullusions continues where his debut album left off, except most of this album was recorded with the Mosrite guitar solo, with only a few addition musicians sprinkled throughout.

With a Martian theme throughout (Martian Soliloquy, Merrie Martian Melodies, Martian Monophony, and Requiem for a Martian), there's a definite outer space theme. There's also songs like Bach to the Future (Bach played on electric guitar with some percussion backup by Remi Bakaba) and Flying Saucerama (the Close Encounters Theme played like a doo rag polka) which continue the space theme beyond Mars. But there are also more earthly concerns like Disposable Rag (where Engelhardt is joined by Chris Darrow on fiddle) and Beavers in a Hot Tub, a lost recording with a party in a hot tub vibe and a play on Leave It To Beaver (hopefully Engelhardt won't get electrocuted playing the Mosrite in the hut tub!).

Anyone into solo guitar playing will enjoy this disc tremendously. The lack of acoustic guitars on the album does mean the album has a bit of a monotonous feel to it, but it also gives the album a feeling of continuation like it's one whole work rather than 14 shorter works. anyone interested in the works of John Fahey, The Ventures, Fred Frith, or Chet Atkins will no doubt enjoy this disc. And those interested in the Martian/outer space themes should also check this disc out as well. The album is playful and inventive so it never seems like Engelhardt is here to just show off.