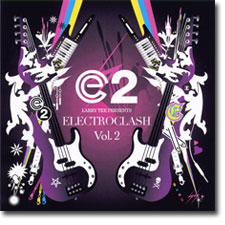 Larry Tee created the label Mogul Electro and the NYC Electroclash festival several years ago. He had an extensive history behind the scenes already. He had written a disco hit for Ru Paul.

He capped a moment when he patented the name "electroclash" and applied it to the group of bands which were using Electro and risque/bored lyrics to update the sound of 80s synthpop.

Now it is 2004 and the name "electroclash" has become unfashionable. Many people say he doomed the success of the term by patenting it first, then filling the newly named bag with bands to represent the style second.

'Electroclash 2' follows the two compilations he released on his label and the full length by WIT. It no longer relies exclusively on the talent of NYC bands, though some are represented here.

I really like the Proper Filthy Naughty, Future Wives, and Barcelona tracks. I also like the Freezepop, WIT and Badd Inc. tracks, though I had known them previously, which decreased their impact for me.

Note: the CD lists 18 songs, though there are only 17. The Spalding Rockwell cut comes right after the Love is the Blood of Destruction track without changing track numbers. The list above is accurate.

Mogul Electro releases in the gullbuy: