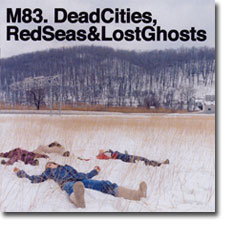 Too much has already been said about this disc. Write a positive review, drop a few names and a band can get better distribution in a foreign country. Case in point, M83’s second album, DEAD CITIES, RED SEAS & LOST GHOSTS, It is easier to find this release than their debut in the U.S.A.

I can only assume reviewers for other websites only had access to their recent effort and are not in a position to compare it to their first album. If they could have done so, they would have noticed the remarkable contrast between the two. There are virtually no samples on the new album. It is almost pure synthesized electronica.

The sounds on this disc feel like they are derived from a studied listening of French analogue synth tracks from the 1970s (Serge Ramses and the like). M83 count Tangerine Dream’s “Phaedra” among their top ten albums (list at bottom), perhaps this is, for all intensive purposes, their “Phaedra”. Now—don’t get me wrong—I enjoy good analogue synth sounds, however, this disc smacks of imbuing them with a pop attitude that I find unnecessary and out of place.

Current reviews have compared M83’s current sound aptly to My Bloody Valentine and Icelandic band Müm. Dropping names of bands like these in a review immediately puts anyone who loves shoegaze on guard. Perhaps they comprise a larger market than the band’s debut. Whatever the case may be, their sound on this release leaves me a bit cold.

The only track I really like is America because it seems to be the only track that makes reference to their earlier sound. (A note about the last track Beauties Can Die is only 4 minutes or so then gets quiet and counts up to 11:05 where a processed organ sound comes up making a sound as though something is about to take flight.)

If this album takes a person on a journey from start to finish, it is certainly more ‘Hollywood’ in comparison with their debut, which bears clear its European Roots. Their sophomore effort is like the “Truman Show” whereas the first was more “Wings of Desire”. An import and an effective bridge, pandering to tastes too unrefined to constitute appreciation.

From a band who is named after a spiral galaxy, one expects more introspection and self-criticism. I dislike this work because I know they are capable of better but seem to have accepted the comments of producers or have simply decided to modify their sound towards more commercial tastes.

This CD certainly takes the more accessible aspects of the first album to the dismissal of the challenging ones. Some of these tracks are just lame attempts at sounding like Michael Nyman’s early experiments with electronic programming. Their forced drama fails to interest me at all.