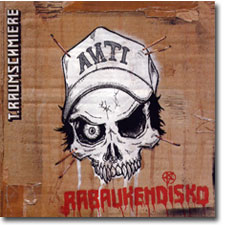 'Rabaukendisko' has 4 very different versions of the track Rabaukendisko, and a video of the song as well.

Rabaukendisko 1 starts off the disc. It is the version of the track from the 'Radio Blackout' record.

Rabaukendisko 2 follows. The pace is slowed down and spread out, and the track is given breathing room. Soon the track picks up again, and plummets, but is a different way than the original. i like this version a lot.

Rabaukendisko (the Bug's DANCEHELL RMX feat. Ras Bogle) brings Jamaican dancehall styled vocals into the previously instrumental song. The vocals bark out and the pace is wild. Fans of DJ rupture or DJ Scud will feel right at home.

Rabaukendisko (the Bug's DANCEHELL RMX) works better for me, because it has less of the added-on vocal. The sound is crazy, but everything comes together into one unified whole.

The video is nothing too special for me, especially after being spoiled by the great cartoon video for his last single 'Monster Truck Driver.' The video consists of live shots of Marco playing drums in his rock band (not sure what their name is), interspersed with artsy cuts of him mugging to the camera in strange rooms.

I like Rabaukendisko 2 and Rabaukendisko (the Bug's DANCEHELL RMX) on the single, but would not advise you to get the CD version just for the video - stick to the vinyl.