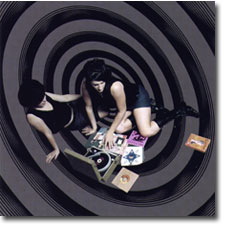 C'mon DJ is Mr. Airplane Man's 3rd full length for Sympathy For The Record Industry and since I haven't been following the bands various releases I can't compare this album to the previous ones. I can say that this album is a wonderful work in the continually growing stash of retro stripped down rock'n'roll.

Mr. Airplane Man is a female 2 piece (guitar, drums and vocals, sometimes augmented by more on cd, but usually staying stripped down) originally from the Boston, MA area who base their sound in a blues based sound, but aren't afraid to branch out successfully into other music styles, like a homegrown version of Holly Golightly or Mazzy Star with an edge. One look at the cd gives you a good idea where these two women are at - the cover shows them spinning 45s on a retro suitcase type portable record player and the album features raw originals coupled with covers of the likes of Howlin' Wolf (Asked for Water - it's noteworthy that the band name is taken from a Howlin' Wolf song), The Wailers (The Hang Up, a haunting Pacific Northwest garage rocker), The Outsiders (this Dutch group's Sun Goin' Down is another haunting blues ballad), and a traditional blues called Travelin'.

Mr. Airplane Man is the most exciting on their originals however and when they break free from the blues mold, like on the fiery cd opener C'Mon DJ; Don't Know Why, which sounds like Patti Smith's Dancing Barefoot; the mesmerizing and powerful Wait For Your Love; and set closer Lonesome Road which sounds like Holly Golightly jamming on a Tom Waits tune.

Also, check out the video for Jesus on the Mainline (a song taken from their 2002 platter Moain') also available on the cd to see what the girls look like live. I've seen Mr Airplane Man live in concert and I'd highly recommend seeing them especially when they are supporting bands like The Real Kids - you can't go wrong!