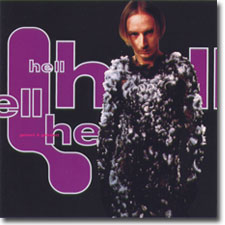 Before DJ Hell started the International Deejay Gigolos label, he released Geteert & Gefedert on the Disko B label in 1994.

Lost to the times in '94, Disko B has seen fit to reissue this full length disc in 2004, and even though there's nothing too earthshaking here, it's definitely refreshing to hear DJ Hell in his trance electronic mode.

Mining a similar territory to other fellow Throbbing Gristle/Psychic TV fans PWOG, DJ Hell lets loose his trance demons on 6 original tunes and one cover of Throbbing Gristle's Hot on the Heels of Love.

The whole album sounds like a series of 12 inch singles compiled together, and they hold up well as a group of songs. In fact a lot of these songs have been compiled on mix cds

Only the final track Im Mutterleib never appeared on any compilation.

All of the tracks are good, but the ones that sound the least dated or most crucial include the lengthy opener Herz which combines an Exquisite Corpse like rhythm belt with tasty sighs and echoed voices.

My Life is Hell has a great rattlesnake rattle like rhythm which is entrancing. The Hot on the Heels of Love cover is faithful to the original as it slinks along sinsterly. It's too bad only the Northstar Remix of Definition of House was included, there's room for more mixes of this minimal piece. And finally, Im Mutterleib is the blueprint for what Dopplereffekt would try on Linear Accelerator from 2003.

DJ Hell in the gullbuy: