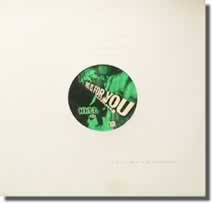 A treat from 1999 that MUST be on the shopping list for all fans of DJ Hell or Chicks On Speed.

This Is For You is a monster song with distinctive vocals by Melissa Logan of Chicks On Speed. Melissa uses her New Yorker accent to make the words of This Is For You sign and seal the cynicism summed up in the song's last moments: "This is for you- da da - your own bohemian wet dreams."

This Is For You is as strong as any Chicks On Speed song. There are three versions of the song on this hard-to-find 12inch. The first is the album version. It was produced by DJ Hell with co-producer Filippo Moscatello. The vocal arranger (whatever that means) was Tobi Neumann and Hell. I like the album version best of the three. It has everything. There is Hell's finest music and lots of vocals. The synth cuts like a ray gun, and the bass drum pulses like a pulse. The imagery of the lyrics is vivid. Everyday life and the things we do nonchalantly become the biting subjects of Melissa's story. She observes things with the same eye David Hemming has as he shoots his camera in the 1967 Michelangelo Antonioni film Blow Up.

The B-side has 2 mixes of the track. Terence Fixmer released an Electronic Body Music album on DeeJay Gigolo in 2001. He takes This Is For You and accents the pulse of it. It is almost a phase shifter effect he puts on the synth. It makes it sound like you are hearing the music just before going under during general anesthesia. He drops the music down to nothing then brings it back in a stomping climax.

The second mix is by Decksharks. Decksharks are Tolis and Filippo 'Naughty' Moscatello. Their mix also leaves in the vocals, but they accent the 4/4 beat and clip up the voice into a simple repeating phrase. When the full groove of the track blazes, a house music melody skates on top of the voice and beat. The song ends with a Brazilian sounding percussive accent.

All three mixes are great. If I only heard one of them without the others I would think it was the finest. Hearing all three together I like the original mix the best. Find this 12inch if you can. You will be glad.

related records in the gullbuy: