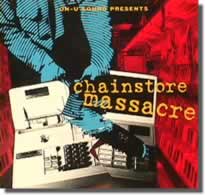 On U Sound is a very interesting label with over a hundred releases. Chainstore Massacre was released in November 2002. It is a 15 song compilation that includes first tastes of some albums that have just been released.

The general sound of On U Sound is punk reggae. Combine The Pop Group with the productions on Wackies Music and you are close. The crazy sounds of Japanese dub act King Jammy meets Dry and Heavy are close. So is the sound on 2001's 'Now Thing' compilation which came out on Mo Wax.

Adrian Sherwood and Skip 'Little Axe' McDonald have a lot to do with the sound of On U Sound. Each are both musicians and producers. Little Axe have two songs on the comp. The first is One Drop Blues. It is not a version of the Wailers classic One Drop. It has a heavy dub styled bass and uses melodica, but is more like a rock jam than a reggae track. It is from the Little Axe LP 'Hard Grind.'

The second Little Axe track has Sinead O'Connor singing. Her vocal is not a token contribution. My Love I Bring is all about her lyric. It is almost a pop song that could be a radio hit. It will be on the LP 'Champagne and Grits' released next month.

Adrian Sherwood has Xplanation, a track from his just-released 'Never Trust A Hippie' solo record. Xplanation is my favorite track on the comp (along with the Asian Dub Foundation track). It is upbeat and spicy, with lots of interesting embellishments.

I mentioned The Pop Group earlier. Mark Stewart (former Pop Group vocalist/writer) has a new track on the comp called The Lunatics Are Taking Over The Asylum. It is a strong cut that makes me look forward to any new stuff he should release. It has metal guitar, Mark's tortured vocals, and cluttered madness that has characterized most of his songs. If you liked his other projects, you have got to hear this new track.

Asian Dub Foundation are a name I have read about many times, but have never actually heard. Their track on this comp is Cyberabad. What a cool cut! It is like a combination of dub and Bollywood. Quite fine.

The last of my favorite tracks is Dub Syndicate's It's Blessed. It is one of the more traditional reggae/dub tracks on the disc. Rock solid bass, echo, and a rasta vocal appear in It's Blessed as genre checkmarks - distinctive execution makes the track rise above being a mere genre piece.

Some of the other tracks have distinctive markings as well. Mutant Hi Fi's Apollo 11 uses the voiceover from the Apollo 11 mission on top of its echoed out dub bottom. 2 Bad Card's Noise Polluters has news reports on noise pollution and urban violence on top of its base. Junior Delgado's Fully Legalize reminds me of Peter Tosh's classic track Legalize It.

As all the On U Sound releases are very inexpensive, I think that this disc is a worthy buy, especially if you are a fan of even one of the artists mentioned in this review.

On U Sound in the gullbuy:

On U Sound Box Set