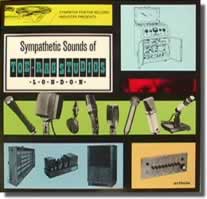 Sympathy For the Record Industry and Toe-Rag Studios team up for the Sympathetic Sounds of Toe-Rag Studios in London compilation which spotlights 14 tracks recorded by Liam Watson (ex-bass player from The Armitage Shanks) on the vintage equipment that would even startle the most pig-headed 1960s aficionado. In fact you would be hard-pressed to put a date stamp on tracks 1, 2 and 10 - so vintage sounding are those tracks.

The Orbitus by the Ron Drand Orchestra is an instrumental which starts out the set and it has Joe Meek and the Tornadoes' Telstar written all over it, and it's not just a retro rehash, it sounds like the real thing. Teddy Paige's Jesters sing London Cherry in a relaxed mode which might as well be on a Bear Family Records rockabilly collection. The Cobramatics are a Scottish group with members of the Kaisers (also featured here), with guest star Gustav Temple who created the Chap Magazine and book the Chap Manifesto. Puddings and Pies is HIT number one on this compilation and reminds me of the hip songs on the Songs For the Jet Set compilations with its naming of British foods for lyrics and flute solos. "Sheep's head and Bacon"...indeed! I was amazed when I heard Holly Golightly's first single - amazed at how incredibly she was able to recreate a solid 60s sound and now I know why. Holly does the Irma Thomas song Ruler of my Heart here with stride - and while she is no Irma (who is??) she does a commendable version. The Rapiers That Old Yeah Yeah Feeling is a handclapping bouncer - it really sounds like the Yardbirds are in the house with this one. Billy Childish continues on Nurse Julie in his love of Hendrix and the power trio with this hot rocker he recorded with the Buff Medways. I understand that Billy has worked in a psychiatric hospital so maybe this song has something to do with a nurse he knew. I had never heard The Bristols with Toe-rag man Liam Watson himself and French singer Fabienne Delsol - but when I heard their version of the Pete Best Combo's original called The Way I Feel About You I was smitten - and it's my second favorite track on the compilation. I was just as taken with Ludella Black's version of I've Just Seen A Face - a fuzz drenched Beatles cover from the Delmonas singer - I'm so glad she still records, because the Delmonas were always one of my favorites. The Quakers do an instrumental Theme from What Will They Think Of Next with incredible farfisa organ lead and surf guitar echo. Rounding out the compilation is the Masonics take on the flat-out rocker Ooh Poo Pah Doo. I had always wondered what happened to original Milkshakes lead singer Mickey Hampshire in recent years and I'm so happy to see him joined by Bruce Brand (a former Headcoat) on this incredible ending tune. I always thought Mickey actually had a better voice than Billy.

I've loved the Toe-Rag recordings I've heard throughout the years, since its creation in 1992 - and was only too pleased to see this excellent compilation of Toe-Rag haunts. Toe-Rag is a place for those who loved Pete Best almost as much as the Beatles (or more than); for those of us who wish Thee Milkshakes never broke up; or that the years had stopped in 1965.