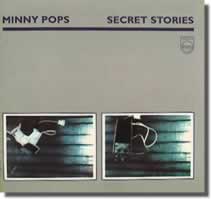 The Minny Pops Secret Stories cd collects singles and odds and ends not found with the Sparks in a Dark Room cd - both of which have been reissued by LTM.

There is a more diverse sound to Secret Stories - also a more harsh dissonance, especially on the tracks taken from the early singles from 1981 and 1982 - tracks 1 through 4 - which are jaw dropping. Dolphin's Spurt starts things out in an almost instrumental mode with only shouted but buried lead vocals bouncing through the rhythm track and the PIL-inspired lead guitar. Goddess (which is heard twice - first being the single mix - and the second being in demo form) has a killer bass riff, coupled with slapping rhythm box and mutilated guitar: a sound that bands like the Cure would kill for. Track 3 is the loping Island which seems to point straight to the future of industrial rock in one fell swoop. The final single side is the hyper Secret Story which is driven by multi-percussive bursts and all pulsing bass coupled with lead singer Wally van Middendorp's mournful Ian Curtis styled vocal. All 4 single sides are amazing.

The demos, while not quite as exciting are still as creative. My favorite by far is track 6 Mono - which is an intense drenching instrumental with all sorts of twittering rhythms which just keeps rising in intensity - like if PIL had ever gone cinematic. The demo of Goddess is longer but a little more generic sounding. We are also treated to the unreleased 12 inch mix of Time (track 9) which is by far one of the best Minny Pop songs. Track 11 Body Language is a demo that starts out sounding like a Throbbing Gristle remix but soon turns into a rhythmic/chant workout.

Of the tracks culled from the two mid-80s albums (Poste Restante from 1982 = tracks 14-17 and Fourth Floor from 1985 18-21) by far more interesting are from Poste Restante (which originally came out on Minny Pop's leader, Wally van Middendorp's own label Plurex). These tracks are a lot different than any other Minny Pop songs in that they use a lot of piano: it is like broken dissonant Cabaret music - reminding me of Nick Cave or Legendary Pink Dots. Secret Stories is a much needed addition to the Sparks in a Dark Room album.

Minny Pops in the gullbuy:

Sparks in a Dark Room

Other LTM reviews in the gullbuy: