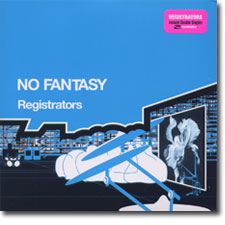 Registrators are a 1977 style punk rock band from Japan that have been releasing records for almost 15 years.

CD and double 7inch versions of their Japanese only 2002 release No Fantasy have just begun appearing in town.

No Fantasy is a 7 song EP that sees the band playing guitar based punk power-pop that reminds me of 1978 bands like The Boyfriends or Speedies or post NY Dolls bands The Idols (Jerry Nolan), Corpse Grinders (Aurthur Kane), or Criminals (Sylvian Slyvian).

Hiroshi Otsuki is the a guitarist and writer in the band, as well as the singer. He always sings in English. He recorded No Fantasy himself in the band's recording space. Along with bandmates Jun (guitar), Ren (bass) and Diera (drum), Registrators have an extensive catalog of releases. This EP was his followup to the Japanese-only Velocity LP, which had a slick studio sound and was very well received by fans.

Missing Heartbreak sounds like The Records Starry Eyes without the harmony vocals, and a little less of the sugar on the pop. Distraction Freedom and Rebel Eyes sound a bit like the Wipers, particularly the guitar sound. Negative Repulsion has a guitar solo with a meaty sound that reminds me of Greg Ginn in early Black Flag.

Registrators are an interesting band with a sound that is different than everyone else. Their live shows are legendary, and this homemade EP shows their solid sound in an atmosphere only a few steps away from live. Even though they consider this EP lo-fi, the quality is as good as many bands studio efforts.