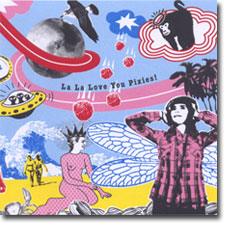 La La Love You Pixies! is a Swedish tribute record to the recently reformed Boston band the Pixies. Its release is especially timely, as the Pixies are in the midst of a giant tour. Most people seeing the band on this tour have never had the opportunity to see the band before.

The disc starts and ends with Doktor Kosmos performing two very different versions of Distance Equals Rate Times Time. Doktor Kosmos is a member of Komeda, and has the highest profile of any artist on this compilation. I had never heard of any of the artists before. The first version he does sounds just like The Homosexuals, with a treble guitar, yelping vocals, and a hyperactive edge. The second version has an effect on the vocal making it sound like some weird SF rock/electro thing.

Quit Your Job's version of Broken Face is pretty great too. It also has a hyperactive sound like The Homosexuals, and is also less than 2 minutes in length.

Monkey Gone To Heaven gets a good treatment by Hamell on Trial. The song is given space to breathe and the lyrics are spoken like someone telling a story. the chorus is overdriven like it is sung through a megaphone.

Hello Goodbye are one of the only female vocal bands on the disc. their version of Gigantic is fairly minimal (electric guitar, drums and vocal), like Spinanes. It is very successful - one of my faves on the disc.

David Fridlund & Sara Culle's version of Wave Of Mutilation has piano and dual vocals right up front. But with the jittery guitar/bass/drum music behind them you get a cool effect almost like Sparks.

"Here Comes Your Man was written by Black Francis and recorded by the mighty Pixies for their Dolittle album from 1989 or something. Mattias Alkberg BD performed their version of the song some fifteen years later in a studio called Lill tomte-fabriken (in Lueå ) and was recorded by Stefan Sundström. MABD (and his writer) wants everybody to know that although the original version is superior, this version does possess an awkward campfire charm. If you can't make a song on your own, don't bother covering it. Those who can't see that clearly, are usually the ones that ought to hear it the most. Mattias Alkberg BDis not part of that last category." - Fillipa Näslund

This quote sums up La La Love You Pixies! pretty well. All the cover versions on this disc are performed with love, and all are decent, though (of course) none equal the brilliance of the originals they are based on.