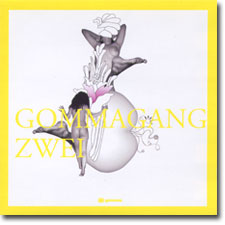 Gomma have been releasing two kinds of releases in the past few years. On the one hand they've released compilations of obscure 80s music like on the compilations Anti NY , Teutonik Disaster Volumes 1 & 2, and Downtown 81, and on the other they've released their own music like Leroy Hanghofer White Trash or Headman's It Rough. What makes the Gomma compilation Gommagang Zwei work so well is they are able to combine these two sides of the label in a summation of their work from 2002/2003.

Things start out strong with some awesome modern sides from the Gommagang. The Headman version of Androgyn by Munk get the proceedings going in the dirty dub style Gommagang is known for. Hiltmeyer Inc's Narcotic and Mocky's JDs Theme keep the dirty synth sound alive and sets up for the great Leroy Hanghofer track Bathroom Boogie which has been an all time favorite of mine the past couple of years. Bathroom Boogie mixes into the Chicken Lips Trax dub of Headman's It Rough perfectly. Kamerkino's Metall Auf Eis sounds like if Billy Childish were to become artsy with its violin, static guitar and distorted vocal in German.

The latter half of the compilation looks to the reissue compilations for the best from Teutonik Disaster like Carmen's Schlaraffenland which uses The Archies Sugar Sugar as an 80s pop theme. Exkurs' Fakten Sind Terror could very well be a Chicken Lips track thanks to its bassline, and it's only its German male lead vocal which places it in the Teutonik Disaster timeframe. And if you missed Starter's robotic glory that is Part Of Me on Teutonik Disaster, check it out here. For something completely different check out the last two tracks - Poets Of Rhythm's jazzy Summerdays and Mocky's harpsichord laced laidback rap Sweet Musik.

Gomma Records in the gullbuy: