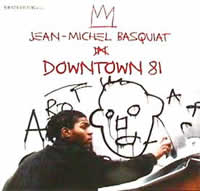 Just what we, the dwellers of this somewhat stagnant, rather derivative rock culture need: another compilation chronicling the disparate, though ultimately savory sounds of New York early-eighties avant rock.

The musical accompaniment to the film Downtown 81, which starred cult artist Jean Michel Basquiat as a roving bohemian traipsing from one stodgy Lower East Side dive to another, the 81 soundtrack documents the different spices in the NYC batch as the decade turned. All but Mars are here from No New York. DNA with two tracks including a live version of 'Blonde Redhead,' Lydia Lunch solo, and James Chance now fronting as James White, with his backing band, the Blacks.

The flavor of Downtown 81 is unmistakably rhythm, though, with Liquid Liquid, the Blacks, and Coati Mundi Hernadez post-funk freak-outs. The soundtrack as a whole displays the homogeneity of the scene within the greater context of disparate Gotham urbanity. The ecstatic groove on the dancier tracks like Kid Creole's K Pasa Pop-I borrow unmistakably from Latin music. Basquiat, himself a Creole, was the son of immigrants. Amazingly, though, the marimbas and horns of Kid Creole sound perfect besides the proto new-wave of the Plastics and the more self-conscious 'art-rock' of Tuxedomoon and DNA.

Gathered together, the tracks on Downtown 81 document a true movement, where while sound devices and personal background diverge, the greater message, placed behind the backdrop of New York City and its brooding squalor, is generally one of manic, rhythmic protest. Today, you can spend 900 hundred dollars a month to live in one of Richard Hell's old closets. These compilations resurface for a reason, probably to remind us of something. The first emotion it evokes is envy.