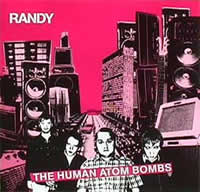 The fourth album (released in 2001) by Randy -- a quartet of Swedish politicalpunks (anarcho/socialist) with rock n' roll hearts.

One track (Karl Marx and History) sounds like the Housemartins' Freedom, for some reason -- maybe the rhythm? -- while still in a Clash vein. There's also an underlying influence from '50s rock and roll (see Keeping Us Out of Money, for example). And If I could draw comparisons one last band, I Believe in the Company makes me think of Bad Religion sort of (the verses, anyway).

Some favorite tracks: Whose Side Are You On? (faster and harder than a most of the record but, alas, only 47 seconds long), Chicken Shack (sloppy, balls out rockin' blues), Human Atom Bomb (about Little Richard, and fittingly rootsy), and The Heebie Jeebies.

Nice Clash-y tracks include Summer of Bros, Proletarian Hop, and Win or Lose.

All in all a pretty solid, if not groundbreaking, record. It won't suit everyone's tastes, but then again, what does?