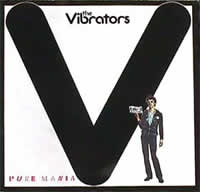 The Vibrators were one of the first 'second string' bands from the original 1977 London punk rock scene. Pure Mania came out very early in the timeline of punk and really kicked (both then and now).

The Vibrators were not as well known as The Clash, The Sex Pistols, The Damned, Buzzcocks, Eddie & The Hot Rods or Generation X, but they were scooped up by CBS Records when all the labels went into a frenzy trying to catch onto the new explosion that was happening.

What they came up with is a great LP that had clean production, lots of energy, and fun songs with great melody that stuck in your head. After all, this is the band with the song Stiff Little Fingers that inspired the name of the Irish band a few years later.

My favorite cuts are You Broke My Heart, I Need A Slave, London Girls, Sweet Sweet Heart, Keep It Clean, Petrol, Bad Time, and Baby Baby Baby. The Vibrators recipe is simple - a four man band with 2 guitars, bass and drum. The lead vocalist Knox had a pretty cool voice that was a bit like Wayne County. You can hear how The Vibrators inspired the Scottish band The Rezillos.

The Vibrators were not mad or crazy tough. They were not afraid to do what could only be described as a punk ballad (Baby Baby Baby), a feat which they pulled off excellently. There are really no bad or boring songs among the 15 here, a track record way better than other bands of their ilk like 999. I really like this record, and you can buy it cheap, so I say 'Go for it'.