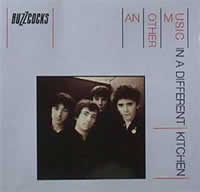 Buzzcocks released the single that everyone in the know sought out after Sex Pistols Anarchy In The UK opened the floodgates.

Spiral Scratch was an incredible EP with the amazing voice of Howard Devoto and an incredible double guitar sound. Howard Devoto left the band right after that EP in 1977. Most people thought Buzzcocks could never rebound from that loss. But what happened is that Pete Shelley adopted Howard Devoto's singing style and stepped up front to begin two years of amazing records and singles.

Buzzcocks had a 'for the fans' ethic that prevented them from putting any of the songs from their singles on LPs. They knew that their fans already had the songs. Another Music In A Different Kitchen came out in 1978 as their debut album and just blew everyone's minds. The label (EMI) went and released a single from it, giving Buzzcocks a first taste of the bittersweet price of success.

If you have never heard this record you will freak when you hear cuts like I Don't Mind, Fiction Romance, or Fast Cars. If you have heard this record you will be happy to hear it minus the scratches that your copy has, and with 4 songs from singles tagged on. The bonus tracks (Orgasm Addic', Whatever Happened To...?, What Do I Get, and Oh Sh*t) are ace tracks. They comprise the A and B sides of two singles.

THIS is the Buzzcocks record I believe you need. The second record Love Bites is good, but nowhere as classic as this, and the singles comp is superseded by this record. All songs please.