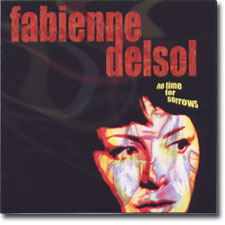 Following up on Thee Headcoatees and Delmonas sound from the 80s and 90s, Fabienne Delsol first appeared on Introducing the Bristols in 2000 and Tune In With ...The Bristols both released on Damaged Goods and recorded at the famed Toe Rag studios by Liam Watson. Both of those albums offered up a promising and invigorating blend of British beat sounds and French chanteuse vocal styling not unlike the work of April March. A few years later and no longer with The Bristols who've broken up, Fabienne Delsol continues on with the sound she mined with that group while adding a maturity of sound to her solo debut entitled No Time for Sorrows.

Fabienne Delsol enjoys help from fellow Toe Rag studio mates The Rapiers backing her along with Liam Watson himself and George Miller from The Kaisers (who also wrote a few the originals here). It's safe to say that Fabienne Delsol has mellowed out on this release as compared to her days with the buzzing beat sound of The Bristols not unlike what Holly Golightly did after she left Thee Headcoatees. I'm reminded also of other talents like Lida Husik and pre-Mazzy Star group Opal at some points on No Time for Sorrows.

As with her work with The Bristols, it's only the stray cover tune which isn't the best choice that brings this release down a tad. I was never too fond of The Bristols cover of My Bonnie and likewise it seems unnecessary to cover the Serge Gainsbourg/France Gall tune Laisse Tomber Les Filles which April March has already covered as Chick Habit. Pied Piper, originally written by Steve Duboff and Artie Kornsfeld (who also wrote The Rain, The Park And Other Things for The Cowsills in 1967) and recorded in the UK by Crispian St. Peters is a rather strange one to cover as well.

Other covers though are fresh, including obscurities like Give Me Time originally by Faron's Flamingos ( which included Trevor Morais from The Peddlers and Faron Chambers) and When My Mind Is Not Live originally by Status Quo.

The handful of originals including I'm Gonna Haunt You, No Time For Sorrow, Open Your Arms and Don't Fall in Love With Me all written by George Miller add to the laidback beat influenced sound and lend themselves to Fabienne Delsol's vocal style. Anyone who may have enjoyed The Bristols sound back in 2000 and 2001 will enjoy this debut album by Fabienne Delsol, but it remains to be seen if she really ever will truly come into her own.

the Bristols in the gullbuy: