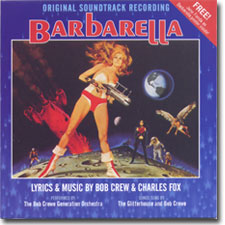 The soundtrack to the camp sci fi classic Roger Vadim film Barbarella (1968) starring his then wife Jane Fonda has been reissued by Soundtrack Classics in 2004, along with some related bonus tracks. Recorded by Bob Crewe during his psychedelic years when he recorded as The Bob Crewe Generation and with the help of Charles Fox (best known for his TV show tunes including Happy Days, Laverne and Shirley, The Love Boat, and Wonder Woman), and an un-credited Michel Magne (composer for the 1967 film Belle de Jour), and the under-rated late 1960s rock group The Glitterhouse, the soundtrack conjures up sound images the equal to what this camp classic elicited on the big screen, with equal doses psychedelia and soundtrack jazz for a perfect mix of spaced out music.

Anyone familiar with late 1960s psychedelic pop will probably know the theme song from Barbarella as sung by The Glitterhouse's Michael Gayle. Its got wonderful Donovan-eque lyrics that are sung in a crooning space age style and lyrics like

Barbarella, psychadella,
there's a kind of cockleshell about you

Even though the music set forth on this disc is not how The Glitterhouse sounded like on their own, the theme song sets the mood for the rest of the soundtrack.

The soundtrack veers between the instrumental themed music which sounds like a big band jam session with fuzz guitars a la Quicksilver Messenger Service and The Glitterhouse vocal tracks which spruce up the soundtrack now and then (Love Love Love Drags Me Down and I Love All The Love In You also sung by The Glitterhouse). If you're a fan of late 1960s soundtrack craziness, you will most certainly enjoy Barbarella.

There are three radio promotional radio spots, along with 5 covers of Barbarella tunes by a lounge instrumental act called The Young Lovers, but it's a shame The Glitterhouse Color Blind album (from 1968) was not included as bonus tracks to the Barbarella soundtrack. The bonus tracks they do include are fun but not crucial while this album would add a lot to the picture, as well as unearth a lost late 1960s album.

Hopefully a label like Rev-Ola will be interested in reissuing The Glitterhouse album Color Blind. It's a Bob Crewe production during his psychedelic years (when he also recorded a handful of ultra rare Lesley Gore singles which have that teen idol stretching out into uncharted territory).

I hadn't listened to Color Blind for awhile now, but I dragged it out to help with this review and I really dig it. Like many albums from the late 1960s that disappeared without a trace, it's all over the map, with side one veering more towards the psychedelic arena of bands like Procol Harum or Quicksilver Messenger Service, with songs like Tinkerbell's Mind, Princess of the Gingerland, Sassafrass and Cinnamon and Child of Darkness (Journey of a Child Traveler) and crazy psych lyrics, a pronounced organ and fuzz guitar sound, and harmony vocals galore; while the second side of the lp has more of a blue eyed soul sound a la The Rascals or The Small Faces.

Googling the band I found a website which is selling the Color Blind album with bonus tracks, including rare early sides, and The Glitterhouse tracks from the Barbarella soundtrack [ view Glitterhouse site]. With sound files and samples along with a history of the band it really makes it very tantalizing to order.

other Soundtrack Classic releases in the gullbuy: