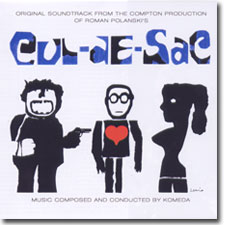 Clocking in at a mere 16 minutes, one wonders if the Krzysztof Komeda soundtrack recording for the Roman Polanski film Cul-de-Sac (1966) released by Soundtrack Classics in 2004 could've possibly fit more easily on a lengthier cd of Komeda music with more soundtracks. Like many mid-1960s soundtracks, this entire recording would've fit snugly on a 45 release or perhaps a 10 inch record.

I haven't seen Cul-de-Sac, the Polanski movie which followed immediately after his classic film Repulsion (1965, starring the amazing Catherine Deneuve) but from what I can tell from this soundtrack and reading about it, it sounds like an intriguing film in the Polanski canon.

It sounds like the Komeda composed soundtrack fits the intriguing plot, which involves a married couple (Donald Pleasence and Francoise Dorleac, a French beauty who incidentally starred along side Catherine Spaak, Jane Fonda and Anna Karina in Roger Vadim's La Ronde aka Circle of Love in 1964) who's tranquil life is interrupted by two wounded gangsters (Jack MacGowan from The Exorcist and Lionel Stander who appeared in Once Upon a Time in the West) when they take them hostage in their home.

The music veers between cocktail jazz and film noir music not unlike many a French or Italian soundtrack from the mid 1960s, like the Catherine Spaak film Three Nights of Love or even an early Jim Jarmusch film. The best tracks are the tense noir styled ones, with plucked bass notes, discordant horns and uptight rhythms, like the Cul-De-Sac theme (both versions which both utilize creepy sounding Tom Waits like calliope organ), Pushing the Car (Johnny Staccato like), Walk on the Water (creeping plucked bass), and Dicky's Death (discordant horns and ambient percussion).

other Soundtrack Classic releases in the gullbuy: