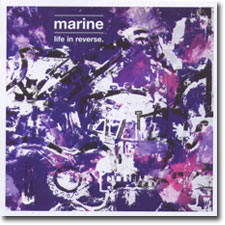 Now that dance-driven post-punk sound has re-surfaced to make such a powerful comeback, the surge in demand for underground early 80's recordings of that ilk has left us with a more complete picture of the original scene -- in this case, the early 80's European underground.

Marine---originally called "The Marines", then later, "Marines"---formed in Brussels in late 1980. The band was started by Captain Beefheart-influenced sax/trumpeter Marc Desmare along with three former members the band Mad Virgins. They were a good looking band with some contagious hooks and (reportedly) an outstanding live show. Soon after a high profile gig opening for Suicide's Alan Vega, they were inundated with offers from major labels. Nothing materialized and Marine stayed together for little over a year, releasing only two 7"s, two 12"s and a handful compilation tracks, including two on the seminal collection, The Fruit of Original Sin.

Life in Reverse compiles all of their recordings. The first single, Life in Reverse was produced by Wim Mertens. This, along with a few more tracks at the beginning of the album takes the early James Brown sound and flavors it with early 80's Manchester-style vocals. Here they sound like James Brown meets A Certain Ratio meets early Blue Aeroplanes... or maybe what Five or Six would have sounded like if they played James Brown covers but added their own words and vocals. Or maybe that’s reaching a bit.

When I first popped in the disc, I was immediately won over by the first five tracks. The songs cruise along like happy, DIY, horn-colored go-carts, speeding along down a straight, one-chord path to no where in particular. Like a lot of funk and funk rock, the vocals serve mostly as a rhythmic device to give the songs a personality and to keep them from being... instrumentals. But in this case, they're off-key and quirky enough to keep the band from sounding like... James Brown. These early singles would make ideal transition points for club or radio DJs ready to move out of the mellow and 'get the party started'.

After the fifth track, things start taking a dive. With a few exceptions, the remainder of the disc sounds like a band trying to figure out what to do next; a band that's trying to evolve but unsure of itself or what it wants to become. There's an audible lack of confidence in the songwriting and playing. In some cases, they sound like they're just fiddling around in the studio but not getting anywhere. At their worst, they sound completely unaware that the "record" button is on. These later tracks range from weak attempts at dub to what seem like skeletons of songs that never got their due. I was even shocked that the band agreed to release some of the tracks. There's probably a completist or two that will just love "having" them. For the rest of us, it’s an easy click of the ">" button.

Enter the attractive blonde singer, Sarah Osbourne. Now the off-kilter, unique vocal stylings are traded for... singing. No more Factory Records-style oddness. Unfortunately, the end-result is a bit generic sounding. They enter a bigger league but wind up sounding a little more amateur by contrast. They have chord changes now but the changes sound forced. They have a female vocalist now, but she's often either buried in the mix or unable to find a melody that does anything for the songs. While some of these later tracks have their moments, they can't quite seem to get off the ground, no thanks to the muddy, demo-style production.

The disc ends on a much brighter note with Kiss my Knee, a Tom Tom Club-style funk piece that features a focused band that actually took some time to work out a fully developed song -- rather than a funk jam with vocals. It plays in a bigger league but sits comfortably with some of the best white funk of early 80's Europe. On the disc, it comes at a time when I could have sworn I was about to hear 3 minute "completetist" nibblets… guitars being tuned over drum machines or something. For the band, it was an artistic triumph that came a day late and a dollar short.

Shortly before the break-up, Marine were scheduled to performed along with The Names in a John Peel session that never happened.

Sarah Osbourne, along with a few other members went on to form the band Allez Allez---continuing in the dance-funk vein of things. She also married Heaven 17’s vocalist Glen Gregory. Marc... whatever... changed his name again to Marc Du Marais and did a musical 180, fronting the Stooges/Birthday Party-esque La Muerte. He is now making a documentary about the cult American actor John Phillip Law. Musically, both departures shed a lot of light on the unfocused direction in Marine’s later output.

Life in Reverse also features two Quick Time movies. The first is a 20-minute “movie” that ranges from Super 8 live footage to home movies with studio tracks for accompaniment. Watching this, I was able to glimpse an understanding of all the raves about their live act. Never mind the band's charisma and Sarah Osbourne's bikini top -- I wish these live recordings could have replaced the completist offerings on the CD. (Or maybe that's coming next.) Or, if this release was meant to squash the mystique of Marine's short tenure in the post-punk era, maybe we're better off having the full picture. For better and for worse.