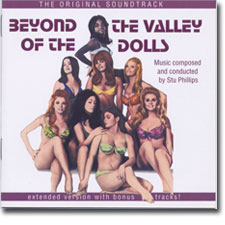 The soundtrack for Russ Meyers' Beyond The Valley Of The Dolls has been available over the years but usually in bootleg type compilations coupled with similar soundtracks (like for instance Groupie Girl - or Valley Girl).

Also, because of contractual differences back in the day, music recorded by The Kelly Affair (The Kelly Affair were the name of the band before they got renamed The Carrie Nations) as used in the movie itself - sung by Lynn Carey and Barbara Robinson - was not made available, and an alternate studio version - sung by Ami Rushes - was subsequently released.

Soundtrack Classics (which also released the Barbarella and Cul-de-Sac soundtracks both also reviewed here) tries to rectify this with this 2004 release which includes both versions, along with the incidental music (all composed and conducted by Stu Phillips), songs by The Sandpipers, The Strawberry Alarm Clock, and snippets of dialog from the film itself. Soundtrack Classics also does up the sleeve art perfectly with liner note comments by Alex Patterson and Roger Ebert along with more information on Stu Phillips and some great stills from the movie.

The plot of Beyond The Valley Of The Dolls aside, the fact that the movie included an girl rock band at a time when this was a new idea was a stunning achievement. The movie appeared around the same time such real all girl rock bands were creating the genre, like Fanny, The Clingers, and The Rock Flowers. In fact The Carrie Nations sound like a cross between The Clingers, The Rock Flowers, Cher and Janis Joplin on songs like Sweet Talkin' Candy Man, Come With The Gentle People, Look On Up At The Bottom and Find It.

The soundtrack flows perfectly between the incidental soundtrack music which is loungey, orchestral or groovy), the rocking attitude of The Strawberry Alarm Clock, the soft pop themed Sandpipers, the girl power attitude of The Carrie Nations and the scene setting dialog. The only complaint is the absence of The Carrie Nations' scorching ballad Once I Had You which is available on previous editions, but mysteriously left off the Soundtrack Classics release.

other Soundtrack Classics in the gullbuy: