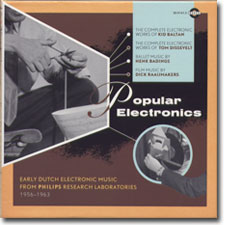 Basta Music out of the Netherlands has really uncorked the dyke when it comes to early Dutch electronic music with the 4 cd Popular Electronics compilation.

Popular Electronics: Early Dutch Electronic Music from Philips Research Laboratories (1956-1963) collects together pioneering music from the likes of Tom Dissevelt, Henk Badings and Dick Raaijmakers (aka Kid Baltan) and couples the 4 discs of electronic music with 7 booklets packed with everything you ever wanted to know about early Dutch electronic music including text and incredible graphics. It should be noted that Irwin Chusid is listed as the book editor, to help give you some idea of where this boxset is coming from.

Along with these previously released material are a lot of never before released music as well.

Things get a little crazy on disc 4 which has a total of 97 tracks most of which are under 10 seconds long. I found myself gravitating towards Tom Dissevelt's Fantasy in Orbit which is "an astronaut’s impressions while orbiting the earth" from 1963 and comprises all of disc three, and is wholly - fantastic. If there's an award for most lavish boxset for the most experimental music Popular Electronics gets the prize.