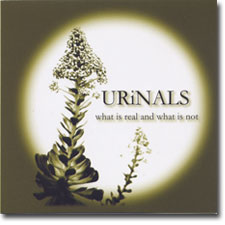 What Is Real and What Is Not is the 2004 album by the re-formed Urinals - their first new material in 15 years. Urinals were an early LA punk band, who evolved into players in the Paisley Underground 1984-era LA as 100 Flowers.

Urinals songs have been covered by Yo La Tengo, The Minutemen, Butthole Surfers, Gun Club, Leaving Trains, Eleventh Dream Day, Halo of Flies, and The Dishes.

The band is comprised of John Talley-Jones (lead vocals and bass), Kevin Barrett (drums), and Rod Barker (guitars and vocals). their 2004 sound reminds me a lot of the 80s Hoboken NJ band Bongos, with a touch of The Feelies, Husker Dü and SoCal skate bands like The Adolescents.

The cover art is not very appetizing at all. It just looks bland - the kind of thing US college radio MDs would throw in the 'maybe, but probably not' bin straight away. The label it came out on is a small independent from Massachusetts. Both these things may keep people from checking out the disc. But as word of mouth spreads about the strong live shows featuring new material, smarter folk will check out this disc and be pleasantly surprised.

My favorite tracks are Cold, Fun Pig, and Theme From "Sex Taxi". Fun Pig tells the story of someone they know who kicks all their vices:

Cartophilia has guitar that sounds like the Mission of Burma song Trem Two, but I don't like the vocals on the track. The solo at the end of the track reminds me of Television. Baby Demons and Beautiful Again are the ones that sound closest to the Bongos.

My least favorite part of the sound is the vocals and the slower songs. Both sound very regular, though at times the vocalist sounds like Boston rock hero Richie Parsons, who has fronted many bands, including the classic Boston punk band Unnatural Axe. The distinctive songs on What Is Real and What Is Not are very good, and there are enough of these to make this record a keeper.