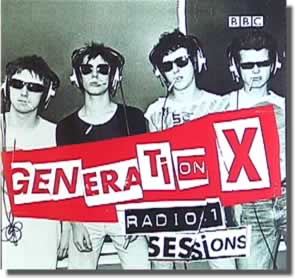 This CD is exactly what I hoped it would be - a chance to hear Generation X at the height of their unity, without the gloss every one of their studio recordings gave them.

Mind you, I loved that gloss - I was not one of those who rejected Generation X as being too commercial - but I have always wanted to hear what Billy Idol sung like without the studio enriching his voice.

The 13 songs on this disc comprise 4 complete Peel sessions the band did.

Day by Day, Listen!, Youth Youth Youth, and Your Generation were recorded April 12 1977.

Shakin' All Over was recorded June 12 1978. This is the version that ended up as the B side of the Valley of the Dolls 7inch.

Paradise West, Love Like Fire, Night of the Cadillacs, and English Dream were recorded January 15 1979.

As you can see, these recordings come at optimum times for Generation X fans. The quality is top notch, the choice of songs is great, and the performances are not precise duplicates of the studio tracks.

In fact, there is one song on here that I have never heard! It is a and Idol/James original called Rock On. Who could have hoped for a new high quality Generation X song to emerge after all these years?

If you own the two Generation X albums and enjoy them you owe yourself this disc - for sure.

Generation X in the gullbuy: