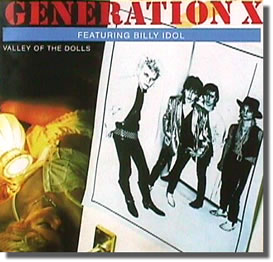 I had a girlfriend who listened to this record so many times that I know every word.

When this LP came out in 1979 I thought it was just OK. The first Generation X LP was classic. When 'Valley of the Dolls' came out I was disappointed. It showed the band returning to the rock roots which punk had exploded and destroyed. Their hair was getting longer, their clothes flashier, and there were guitar solos! Yeah, early Who riffs were still copped, but there was a now a feel of bands like Mott The Hoople and Queen mixed into the sound.

As I evaluate this LP 23 years later it sounds fine, and it is easier for me to understand. In 1979 'power pop' started: Generation X's new sound was similar to The Rich Kids, the band Glen Matlock started after being booted from the Pistols. Stateside, The Mumps, The Speedies, The Dots, and The Boyfriends mastered the new sound with excellent singles. Generation X were just developing in the direction they were meant to go. In many ways 'Valley of the Dolls' is similar to Dead Boys 'We Have Come For Your Children' LP. Both records saw the bands getting way cleaner (commercial) in sound, with great songs that held you in the new attention deficit world of punk.

What I like best about this LP is the spirit and the lyrics. As I listen to this LP it is really no wonder that Billy Idol went off to become the star he was, and Tony James went off to strut with Sigue Sigue Sputnik. The songs on this LP show a band starving for the fantasy of fame. Billy Idol found the motorcycles and fast women he wanted in 'English Dream.' Tony James dressed as outrageously as the character in 'Fridays Angels' when he formed Sigue Sigue Sputnik. Derwood and Mark Laff chose a much lower key future when they formed Empire after the bands broke up. Empire's one self-titled LP on Dinosaur Discs still sounds great today though.

My favorite songs on this disc are probably not the ones you will like best. You know how it is when you live with a record - you work through loving the most obvious songs, towards an appreciation of the hidden gems. To me 'Paradise West', 'English Dream' and (my favorite) 'The Prime Of Kenny Silvers' are the hidden gems on 'Valley of the Dolls.'

The other bonus track on this CD is a cover of the Johnny Kidd & The Pirates' 'Shakin' All Over', which originally appeared as the B-side to the 'Valley of the Dolls' single.

If you are just checking out this LP for the first time, your favorites will probably be the three songs which were the A-sides of singles: 'Friday's Angels', 'King Rocker', and 'Valley of the Dolls.'

'Friday's Angels' takes a bit of the riff from The Who's 'Substitute' and puts it to great use. 'King Rocker' is a hyperactive ode to the type of fantasy excess which I believe Billy Idol sought. 'Valley of the Dolls' seems to me to be more Tony James in the images it brings up.

Earlier I mentioned a Mott The Hoople sound to this disc. That may have to do with the fact that Ian Hunter produced this disc. Dead Boy's may lament Sire's choice of Felix Papalardi as the producer of their second record, but I will bet that Generation X are proud of this record and the fact that they got to work with Ian Hunter on it.