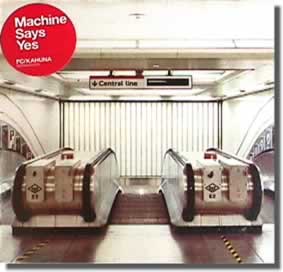 There was not much chance that Machine Says Yes would not get the single treatment - it being one of the best tracks from Dan and Jon Kahuna's incredible debut album, of the same name and also featured on the Tech-Pop cd compilation both previously reviewed in the gullbuy.

A 3 song cd, with the radio edit, two mixes by Josh Wink and Tiga and the video and all are masterfully presented in black and white and spinning 360 sound. These guys know how to keep it dirty and on the floor and they don't hold back. A trippy psychedelic catcher, harking back to acid scenes in its original form and in Josh Wink's Acid Dub Interpretation - the FC/Kahuna boys had it right to begin with, and get it right when the remix factor enters in.

It's quite simple really - FC/Kahuna use exquisite synths, unexpected and interesting rhythms, haunting robotic vocals from Gus Gus' Hafdis Huld and they do not need to even bother with cliche' moments to keep things alive.

The Tiga mix keep things pumping in a New Order Blue Monday style, while Josh Wink really brings out the acid and combines it with a disco fervor making this my favorite of the two remixes. If the machine says, yes, than so do I.