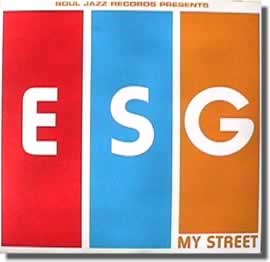 My Street is a one sided 7inch from the upcoming 'Step Off' record the band is releasing any day now.

As almost every gullbuy reader knows, ESG were a band from South Bronx fronted by women. They combined the rhythms of the street with the downtown punk scene in a way that no band had before them.

The ESG re-emergence includes original members AND daughters of original members. The song 'My Street' is better than I had thought it would be. I might have thought that this unlikely band scenario would have been Moms playing with their daughter's band just to jumpstart them into the public eye by evoking the highly respected name of ESG. But it is not like that - My Street is a great song.

In the same way that The Dicatators (coincidentally also from the Bronx and also reformed) recently released a single called 'Avenue A' which talked about the street scene, ESG are talking about the street scene in the Bronx. But while the Dictator's song talks about the gentrification of the Lower East Side, ESG observe the rough side of the streets, as Major Thinkers did in their early 80s single 'Avenue B.' 'If something's going down, Police ain't around -must be on my street.'

I love the lyrics in My Street. It is fun to hear the daughter sing 'if your mama packs a knife must be on my street,' knowing that the Mom in question is playing in the band too.

From the moment you place this single on your turntable, the song has elements you will recognize as ESG. There is that bass. It rolls along with a think beat over the tight snare, just as it always did. The bass reminds me of Jah Wobble in in his finest moments with PIL. What's new in ESG is the rasp of the new vocalist. I like her voice, and the occasional use of echo on it.

A big thumbs up on this one. Now I AM looking forward to the 'Step Off' full length!