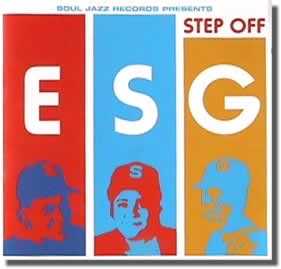 The new ESG disc begins and ends within a single heartbeat, holding my breath for what felt like an eternity before the first track began. With such anticipation, we greet the new songs like an old friend we haven't seen since years before the towers fell: everything is different now since the last time we met, but things are still so very familiar.

In the disc's opener, we are admonished 'If you're good to me...I'll be good to you,' and the bass proceeds to pound out the pavement ahead of us. Fair enough; I've always been one for getting right down to business.

For those who are just discovering ESG, or perhaps found them with the anthology release of A South Bronx Story, ESG began as an all-sister lineup and were part of New York's early '80s No Wave movement, which virtually worshipped ESG's apparently innate sense for stripped-down post-punk art-funk, if only on a tiny scale.

Simultaneously at home in and removed from the extractions and distractions of the Lower East Side, ESG found themselves releasing an EP and debut LP on Ed Bahlmann's quirky and now oh-so-collectible 99 Records imprint, with a simultaneous single (You're No Good) out on Factory over in the UK. Their virtually unknown-to-everyone-else records made them rife for sampling by such hip hop giants as Public Enemy, Wu Tang Clan and others - so much so that the band came back with the full length Sampling Credits Don't Pay Our Bills. Indeed.

All heritage notwithstanding, now fast forward to 2002. The Scroggins sisters are back, after a ten-year absence, this time joined by two of their daughters. Though ESG has been somewhat active in the years since the legendary EP and debut full length hit the streets, this new release has been met with unprecedented expectations.

And it is truly The Big Exhale. It's all still there: the hollow beats and abandoned NYC subway station ambience that so informed the sound back then, all interlaced with ESG's capstone funky, tribal urgency. But there are also moments of real restraint and delicacy, such as the opening guitar of 'Talk It' which can almost pass for Low in its ephemeral fragility, and the few seconds of dreamy Duruttiness before the drums blast off in 'Six Pack.' But no less the rockers, the single 'My Street' takes a no-nonsense approach with immediate exotic rhythms and blurted lyrics so instant and necessary, they are hardly out of Renee's mouth before vanishing into the ether.

Though the new ground broken here is subtle, I think the more remarkable accomplishment here is how ESG has been able to carry on, without missing a beat, to produce seven solid tracks. Like spending an evening with your best friend from high school after ten years of silence, it's like they never left.