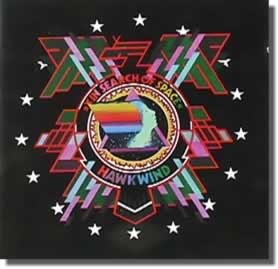 HAWKWIND are the quintessential space rock band. formed in 1969 with the idea of celebrating mind-expanding drugs, science fiction, and heavy rock, they continue to record and perform today.

IN SEARCH OF SPACE, originally released in 1971, was their second album, and though it came out only one year after their first (the self-titled HAWKWIND from 1970) , it is light years ahead of it's predecessor in every way. the centerpiece of the album is also the first track, ' you shouldn't do that', which is 15 minutes and 41 seconds of pure psychedelic space rock bliss. tribal drums, crazy saxophone, swirling sound effects, and a hypnotic, repeating verse all combine to produce an incredibly suspenseful atmosphere, leaving the listener absolutely mesmerized.

' you know you're only dreaming' the second track, is a melodic number with some great distorted guitar sounds that builds gradually to it's climax. track #3, 'master of the universe', is along with 'you shouldn't do that', the highlight of this album. it is one of the classic HAWKWIND songs, one that truly defines this band's sound. the song blasts out of your stereo and the furiously heavy riffing never lets up, soaring with forceful energy to the end.

'we took the wrong step years ago' ( track #4 ) is an acoustic, bittersweet love song, in which the singer looks back at a relationship with regret at what could have been. track #5, 'adjust me', although containing some interesting flute work, is probably the weakest track here. the last song on the album is 'children of the sun' ( track #6 ), another fine acoustic number which employs some nice vocal effects.

this CD version of the album contains three 'bonus tracks', one of which is the original single version of 'silver machine', originally released in 1972. this song features lead vocals by Lemmy (of later MOTORHEAD fame) who had just joined the group. 'silver machine' just happens to be one of my favorite songs of all time. it also happens to be the only 'hit song' HAWKWIND has ever had!

if you are interested in hearing this band for the first time, IN SEARCH OF SPACE is a great place to start.