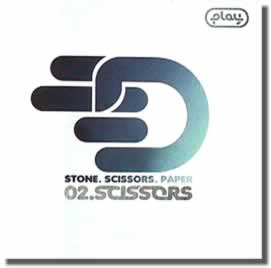 Play Records have the unique position of being a label out of Japan run by a guy from the UK living in Japan (a guy named Jeff Hammond). What this does is create an interesting combination of artists not just from Japan but worldwide.

The STONE SCISSORS PAPER compilations have reached the SCISSORS 02 volume and includes Luke Vibert, Dub Squad, Quante Jubila, DJ Spooky, Depth Charge, The Mighty Quark, DJ Khuv, Monka, Burnt Friedman, Bongoloid, Tsutchie, Takaya, and Mighty Math. A lot of these same artists were included on Volume 01 (STONE) so if you liked that compilation you will like this one.

Since dub has been around awhile now, it is sometimes difficult to update the sound - creating somewhat of an anachronistic feel to most dub. Then again a lot can happen in a year and there are some fresh sounds on Volume two that did not show up on Volume one.

There are some tracks which have a dirtier electro/dance sound to them (Track 7 - Quante Jubila - Quante Musica and Track 8 Bongoloid - 3-way Blubber Ball) and even one track with a hint of glitchiness (Track 11 Takaya - Facial). This adds some freshness that helps to extend the STONE SCISSORS PAPER beyond a basic dub sound.

Track 1 I Hope So, But I Fear by Luke Vibert has an Avalanches sample poppiness to start out.

Track 2 wwwing by DJ Khuv is funky dub with a female spoken vocal.

Track 3 Dub West by The Mighty Quark is what you'd expect on a dub compilation with harmonica and melodica combined for good measure.

Track 4 If/When by DJ Spooky is a masterful blend of soulfully echoed horns, blended samples and a tight hip-hop rhythm which become mechanistic beyond design.

Track 5 Fullmetal by Monka is building tones and darker rhythms and echoes its title quite well.

Track 6 Our Definition of XYZ (Take 1) by Burnt Friedman and the Nu Dub Players is a laid back jam which sounds live and fulfilling.

Track 9 the Lost Mountain by Dub Squad brings things back to dubland after some dancier moments but with no less of a pace - with a reverbed voice which does not detract.

Track 10 Calibration by Tsutchie brings us that nice Japanese acoustic sound which is sort of Brazilian in nature and contains a repeated motif mixed to fine effect with a relaxing higher placed melody.

There is not a bum track on STONE SCISSORS PAPER 02:SCISSORS and I highly recommend it next to Volume 01 and I'm sure Volume 03 will keep the quality high.