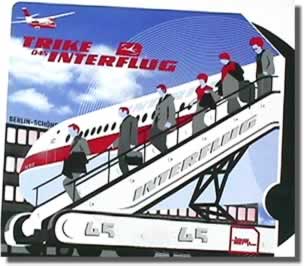 Trike is Steve Sederski, a techno artist from Berlin. As Trike he has several 12inch releases on Ellen Allien's Bpitch Control label. Topless, the song Trike have on the Berlin 2001 compilation is not on this CD. Interflug is his first full length. The title refers to the first airline to service East Berlin in the 70s, the historic Interflug Airline.

Trike makes instrumental electronic music with beats, and vocal samples worked in as counterpoint to the beats. The sound is strong and precise. For instance, on WMF 0:00 AM a voice saying the time is looped into the steady beats like a bend at the end of a propeller. It gives the spins of the propeller more power, and does not stand out: the sound becomes a component of the beat. Trike tip their hats to Berlin's WMF club on the song WMF 0:00 AM. I like it when artists pool together instead of compete against each other.

The songs on Interflug seem to be separated into three categories to me. The first category is classic electronic music like Kraftwerk would play if they were still vital today (no, I don't think the Expo 2000 12inch was anything innovative or new). Most of the songs on Interflug fall into this category. They have the same kind of feel as Kraftwerk had in their 'Robots' period, but with a modern feel and clean lines. Dativ is a great example of Trike using this sound.

Another track in this style is Spreewald. Spreewald is one of my favorite cuts on Interflug. It has a chilled out feel , though it comes from quite another place than 'chill out' artists. Spreewald would make a great addition to a well conceived compilation, such as the ones WMF put out in their komfort.labor series.

The second type of song on Interflug are very straight techno in style. Last Step and 22 khz and Synthetic are three examples of this sound. Trike doing the straight techno sound is my least favorite of the hats they wear, though a track like Synthetic is a good listen.

Lastly, there are two songs on this LP that stand alone. The first of these songs is Purple Haze. It is the first cut on the LP, and is not a cover of the Hendrix chestnut. Purple Haze is immediate and catchy. It is a song made for driving. It pumps you up, and has dialog snippets that intrigue and pump you up further still. If you want to play a song from this LP to a friend, this is the track to play.

The second song that stands alone is Jetlag. It is the only track with lyrics. The lyrics are credited to Thorsten Strohbeck. Jetlag is not a verse/chorus/verse construction. The lyrics are read by a woman. The song works very well on many different levels. It has a relaxed feel, and a bright tone.