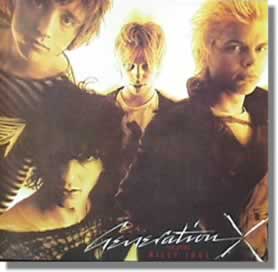 First wave punk par excellance. A little late in putting out an LP, Generation X released their self-titled album in 1978 after a string of singles that were fan-tastic.

Generation X were not afraid of pop. They used great melodies with their quick tunes and tight changes, plus had a vocalist with a traditionally good voice, as opposed to a band like The Clash, whose melodies carried despite the voice of Joe Strummer.

Almost every song on this record was/is killer. This re-issue enters the realm of stellar by including 5 bonus tracks from singles ('Your Generation', ':Wild Youth', 'Wild Dub', 'Trying For Kicks', and 'This Heat.')

The only thing missing is the astounding version of the John Lennon song 'Gimme Some Truth', which appeared on the US version of the LP. But even that is not a real problem, as the CD re-issue of the second Generation X album includes it as a bonus track.

I love all these songs, but would most recommend 'Kleenex' and 'Day By Day' (plus any of the bonus tracks) to those who are checking this for the first time.

Its funny - listening to this record so many years after I first heard it, I am not disappointed. Time has not tarnished these recordings. Many of the lyrics on this LP carry strong memories of good times. I believe that my love of this record is one that you may catch just by listening to this CD.