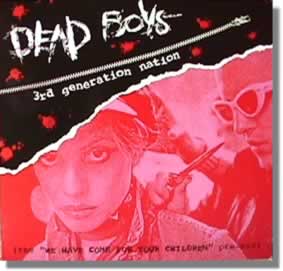 'We Have Come For Your Children' was Dead Boys second album for Sire, released in 1978. Sire knew they had a hot band after the first Dead Boys album 'Young, Loud, and Snotty', produced by Genya Ravan. They decided that the band needed a professional at the helm of the mixing board to make them huge.

Felix Pappalardi (of Mountain) became the unlikely choice, and the band was shipped to miami to work with him as their producer. The result was not what the Dead Boys hoped for, with big duds like 'Big City' embarrassing the hard edged band. Adding to that the misery caused by the famous near death stabbing of Johnny Blitz and the band could not endure.

'3rd Generation Nation' is a 're-EQ'd mix of the pre-EQ'd session, bringing some of the energy and spirit that was the band out front where it belongs.' It is a new release put out by Cheetah Chrome, who has kept the band on record store racks with live records from Dead Boys vaults. This LP is the first time he has hit gold in his attempts to gain some cash from the band. The LP has a great sleeve, fantastic pink/red spattered vinyl, and a good pressing.

The versions sound very similar to the ones on the original record, but the vocals might have a little more bite without the compression used on the original album. As for the songs, Dead Boys adapted five songs from the band that Gene O'Connor (Cheetah Chrome) and Johnny Madansky (Johnny Blitz) formed Dead Boys from.

That band was Rocket From The Tombs, the legendary Cleveland band Cheetah and Johnny shared with David Thomas (pre-Pere Ubu) and Peter Laughner (RIP). 'Ain't It Fun', 'What Love Is', 'Down In Flames', and 'Sonic Reducer' came to life when Dead Boys pulled them from Rocket From The Tombs repertoire. Additionally, Dead Boys changed the lyrics of the Rocket song 'Never Gonna Kill Myself Again' to create the Dead Boy classic 'Caught With The Meat In Your Mouth'.

Both Dead Boys records have a Kim Fowley cover. On the first album they did 'Hey Little Girl', on the second 'Big City.'

If you can find this record I would advise you to buy it.