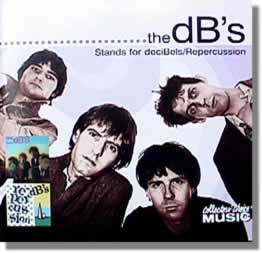 Collector's Choice Music is a label that puts out quality releases by artists a little left of center. They are kind of like a US version of RPM Records. This CD contains the first two records by The dB's.

'Stands For Decibels' came out in 1981 and 'Repercussion' came out in 1982, both on Albion Records. The dB's were and are a very important band to me. Besides idolizing Chris Stamey from his days with Mitch Easter in Sneakers and from his mail-order only single on NYC independent Ork Records (His 'Summer Sun' 7' is still untouchable), my friend Annene went out with Peter Holsapple.

The dB's will be an amazing find today for anyone who followed the Elephant 6 sound and loves a twisted take on pop. Chris Stamey and Peter Holsapple both were great writers who sang the songs they wrote. As a result The dB's have two sounds, depending on who is singing. The joy of it is that both sounds are excellent, and each harmonize with the other.

Even though dB's were an underground pop band, they were centered in NYC and were part of the same gang as No Wave artists like The Contortions and Lydia Lunch (Teenage Jesus). As a result you can hear the occasional touch of dissonance in their sound ('Cycles Per Second' comes to mind). Mostly though, you will hear high energy guitar songs with killer melodies and clever lyrics.

Bonus points to Collector's Choice for including the non-LP songs 'Judy' and 'Soul Kiss.' The latter is one of my very favorite songs by The dB's. Though I really love both these records, the songs I would tell you to listen to are 'The Fight' and 'Tearjerkin' - then I would tell you to just put on the CD and let it play.