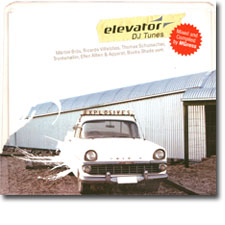 Elevator DJ Tunes is the first mix compilation from MGness (Markus Gebauer), and he does a good job combining tried and true artists with some lesser known titles spanning these 2 cds.

CD 1 is titled "Computer-Controlled" while CD 2 is "Vinyl Controlled" though it seems each disc features tracks taken from digital and vinyl sources. Each disc has highlights, and some sections that don't work as well, but overall the good outweighs the bad, in this first mix from MGness.

Things start out strong on CD 1 with the Märtini Brös. Spoonful Of Lovin' taken from their Poker Flat Recordings 12" Tracks From The Lab (Part 3). This serves as a brief introduction to the clinically synthtastic dub approach of Elektrochemie, a collaboration between Thomas Schumacher and Stephan Bodzin, with vocalist Caitlin Devlin. Caitlin Devlin has a soulful twinge which counter balances the clinical beats nicely.

Dominik Eulberg then adds a slinky underbelly with some ambient effects in collusion with Gabriel Ananda on Schierker Kreisel, a lenghty track culled from their Traum Schallplatten 12" Harzer Roller.

Easy from Trick & Kubic (Frank Hermann & Lars Niekisch) has been featured on other compilations such as Clubbers Guide Summer 2006, Cream Summer 2006 (both on Ministry Of Sound), and John Digweed's Transitions. It's a track that keeps the clinically minimal approach without so much of the ambience, while Valeska Rautenberg's female voice acts as a subconscience voice in your head. Some of the trance effects make this a little cheesier than needed though. (Trick & Kubic offer up there remixing skills on CD 2's No Fear by John Acquaviva & Lützenkirchen from a Blu Fin 12")

MGness follows this up with his own Monobrowed Centerfold, which acts as a transition to the harder edged bass heavy sounds of Thomas Schumacher's Hiroo, from Schumacher's cd release Home (MGness also offers up his own Boozer on CD 2).

Little Machine by Autotune (Adel Dior & Toni Planet), taken from their Fumakilla 12" is another transition piece into Loco Dice's Carthago, taken from the fab Cocoon Recordings 12" from 2006.

Ellen Allien & Apparat's Turbo Dreams adds the crunchy guitars to the mix briefly, while Coburn's Give Me Love was one of my favorite tracks with its electro synth building this mix up into a frenzy, though its brief 3 and a half inclusion (the original ran for 7 and a half minutes) makes for a short happy burst (I'd be curious to hear the Andrea Doria (Pier Bucci) remix of this song sometime).

The last great tune for me in this portion of the mix comes with the more relaxed beats of Ricardo Villalobos' Que Belle Eopque 2006 which puts this mix into a more laidback, popping groove feel.

CD 2 centers more on the vinyl approach, thus is called "Vinyl Controlled", and the end result is a cleaner, less clinical and more old school approach to the sound. Culling from 12" singles makes for some of the most cutting edge music offered up this year, making this the more rewarding disc.

John Tejada's The End Of It All, from his Palette Recordings 12" serves as an introduction, and is a warm and inviting synth workout with some fine beats. Toni Vokado (aka Marco Zlatko Konjevic) soon follows with the minimal tech beats of Leonstein another 12" released this year on Electric Avenue Recordings (Monika Kruse's sublabel of Terminal M ).

Dapayk & Padberg (aka Niklas Worgt and Eva Padberg ) offer up some female vocal dub in the Falko Brocksieper remix of Close Up, taken from one of the Close Up RMXs 12"s. This tweaks and squeals into Ben Klock's Big Time, and the BPitch Control electro squelch sound.

Most of the tracks up until now, were shortened excerpts offering up only tastes from each track, but the Patrick Chardronnet remix of Man In A Box by Cosmic Sandwich runs longer and more complete. This remix is from the Man In A Box Remix Volume 2 12" on the Traum Schallplatten sublabel, My Best Friend run by Triple R (aka Riley Reinhold, the man also behind the Trapez label and Jacqueline Klein (the woman who has done the artwork for the Traum Schallplatten Elektronische Musik compilations).

Gabriel Ananda then returns on his own with On The Skive, a track from the Der Blaumacher 12", the first release on Glückskind Schallplatten (a new label started by Michael Meier from Klang and Spallek and Jürgen Kirsch). I loved the minimal voice over here, with its creepy overtones.

Oliver Huntemann's French Fries has a sound you might find on International Deejay Gigolo Records - fittingly, since this 12" track originally released on Confused Recordings was also released on an International Deejay Gigolo Records CD called Fieber and is something worth searching out (too bad only a little less than 4 minutes of this 7 minute song are here).

Some Swedish beats invade near the end of this mix with the mysteriously self-released Kaliber (who have a series of numbered self released, self titled 12 EPs - here we are treated to the brief inclusion from Kaliber 02) and Özgür Can's Let's Do This Again (from the With Shades Of Grey EP on John Dahlbäcks' Pickadoll Records ).

Ryan Crosson's Hopskotch (from his Gotham Road 12" on Trapez) makes a brief appearance, before we end with Mercury Brew by Afternoon Coffee Boys (aka Tony Rohr & Tim Xavier) from their Cocoon Recordings 12" Glitches Brew.