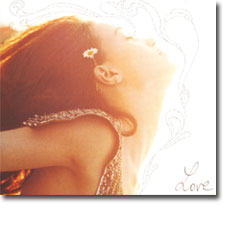 More like a mix cd you'd get from a friend taken from old soft pop records from the 60s (with vinyl crackle still intact), the Love compilation released on La Troisieme Note features some lesser known cuts from soft pop groups like Harpers Bizarre, The Turtles, The Zombies, The Hollies, Ars Nova, and The Free Design. Along with these soft pop groups are lesser known tracks from artists Donovan, Bill Fay, Margo Guryan, Blossom Dearie, Jackie & Roy, and Harry Nilsson. Unlike most compilations filled with soft pop gems, these aren't really hard to find gems not available on cd.

This compilation was compiled by Catherine Piault (from Crammed Discs sub-label Selector; Piault also compiled the Jungle Vibes compilation in 1994, one of the first compilations of Jungle music; she also ran a bi-monthly jungle night in Paris) and Guillaume Sorge (a member of the Dirty Sound System along with Clovis Goux and Benjamin Morando, a collective that also compiled all three volumes of Dirty Diamonds on Diamond Traxx).

It's split into 4 sections with modern spoken interludes between each section which have a hippy vibe, but that don't really add all that much (these interludes are at least tracked, so they don't really ruin the songs). I wouldn't say this is a crucial compilation, but it is a wonderful summer mix impeccably chosen that will definitely bring back memories from when you first encountered these lesser known songs.

For the most part then we're treated to soft pop chestnuts like:

A couple of singers best known for their songwriting have cuts included here like:

There were always some older jazz musicians willing to update their sound in the mid 1960s from the jazz sound of the 50s and early 60s to the soft pop sound of the late 60s. In that vein, included here are:

A couple of cult favorite obscurities do round out the compilation: