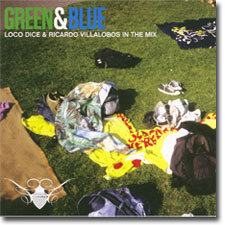 Sven Väth's Cocoon Recordings offers up a souvenir recording culled from 2 sets recorded live at the Green & Blue Open Air club in Germany by Loco Dice and Ricardo Villalobos. This is the kind of board recording you might be able to find and download as a bootleg recording so Cocoon decided to release it instead as a really nice 2 cd set. For those looking for a slightly different DJ mix, Green & Blue is a lot of fun thanks to its live atmosphere that helps you relive the experience (you can actually hear crowd noises every so often). This collection houses mixes with a bit of the old and the new spun in realtime that isn't wholly groundbreaking but it is a living, breathing testament filled with artists on the rise that maybe you missed along the way mixed with more well-known artists.

Loco Dice is best known for some hip hop production and working in Ibiza, but his mix really doesn't show too much hip hop influence. In fact, it's a lively mix with some of the best moments between the two mixes.

A Pink Elln vs. Pier Bucci mix actually comes later in the set, mixing Monne Automne's Teco (Monne Automne is a supergroup with Argenis Brito, Lucien Nicolet, and Pier Bucci with releases on Lo-Fi Stereo). Teco is a track from 2004's Introducing Light & Sound album that was also featured on the Berghain 01 mix on Ostgut Tonträger (a cd which also features a Loco Dice mix and the sounds of Guido Schneider and Robag Wruhme, artists which come later on the Ricardo Villalobos disc here). Loco Dice doesn't keep Monne Automne's Teco so minimal as the Berghain 01 mix, since his mix even has what sounds like a voice over bio on the Isley Brothers mixed into it.

The Loco Dice mix really picks up the pace on Determination by Nima Gorji who only has a couple of 12 inches on Out Of Orbit and Suburban Beats. Nima Gorji is originally from Iran but has been living in Denmark as one of the proponents behind the midweek VeryDisco nights. His track Determination is taken from his debut 12 inch on Out Of Orbit and is a cool minimal dubby glitcher with some echoed vocals and bursts of subtle percussion that help its beats loap along.

The highlight of the Loco Dice set comes in Reiky's Fucky (Murat Tepeli's Remix) originally released on a 240 Volts 12 inch. This track has some glitched out female vocals and an ultra deep bass that will shake your system when you crank it up. This mixes with Bearback's Funky Voodoo Mama which sounds like a one-off because of its sly Prince in the club vocals and that's why its perfect for a party mix (Bearback have a few 12 inch singles out).

Sasse (aka Klas Lindblad) offers up the question, Do Robots Have Soul? from his melodically deep 12 inch b-side on Moodmusic.

Sammy Dee (aka Mario Radecki) from Pantytec and Guido Schneider gives us some Poker Flat slapping electronics on their collaborative 12 inch, Styleways.

That groove keeps mutating briefly on the debut 12 inch Rubicube from Digitaline on the Cadenza label and Tim Xavier's Deception De Real before the robotic rhythms of Darth Vega's Machinery Mix of Yello's Bostich (originally from 1980) send this mix to a darker intense mood for a full 8 minutes.