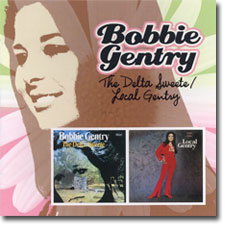 Between the swampy-tinged country folk hit Ode to Billie Joe in 1967 and her duets with Glen Campbell in 1968 that she is most remembered for, Bobbie Gentry released two albums in 1968 collected here on cd for the first time. There are plenty of Bobbie Gentry cd collections on the market (The Golden Classics of Bobbie Gentry on Collectables from 1998,The Capitol Years: Ode to Bobbie Gentry on EMI from 2000, Chickasaw County Child: The Artistry of Bobbie Gentry on Shout! Factory from 2004 and even An American Quilt: 1967-1974 on Raven from 2002), but Bobbie Gentry's albums are often overlooked when it comes to reissues. And like the Lesley Gore two-fer of My Town, My Guy and Me/Lesley Gore Sings All About Love on the UK label Westside, Raven has seen fit to reissue The Delta Sweete and Local Gentry albums on one cd, with 3 bonus tracks. It's the perfect way to hear Bobbie Gentry's work uncompromised and without prejudice from some reissue compiler.

One reason compilation cds don't paint a full picture of Bobbie Gentry, is because she recorded songs that she wrote herself (and she was one of the first female country pop artists to do so) along with the many covers of the day. CD compilations have been weighted either way, and often would not include both.

Each album here features Gentry's acoustic guitar with string arrangements for an interesting hybrid sound that has never really been replicated. Artists like Holly Golightly have definitely been influenced by her original down home sound, although Bobbie Gentry has a smokey southern Dusty drawl to her voice that is the real deal since she really was from the south.

Both albums were produced by Kelly Gordon (who also produced Aretha Franklin, The Checkmates, Ltd., The Lettermen, and Glen Campbell); The Delta Sweete was arranged by Jimmie Haskell (arranger on The Fun and Games' Elephant Candy; Cass Elliot's Bubble Gum, Lemonade & Something for Mama; Al Kooper's Easy Does It; Brian Hyland's self titled album from 1970; and The Band related oddity California '99 which has a cover of The Millennium tunes Prelude/To Claudia on Thursday) with Shorty Rogers (jazz musician who did some arranging to pay the bills around this time on The Monkees' Pisces, Aquarius, Capricorn & Jones Ltd. and The Birds, the Bees & the Monkees; Bud Shank's Lovin' Spoonful cover album, A Spoonful of Jazz; Herb Alpert & the Tijuana Brass' Christmas Album; Michael Nesmith's Wichita Train Whistle Sings; Buddy Rich's Big Swing Face; and Vince Guaraldi's last album Alma-Ville). Local Gentry was arranged by Perry Botkin Jr (arranger on The Electric Prunes' I Had Too Much to Dream Last Night; The Everly Brothers' Roots; Tiny Tim's Second Album; and The Carpenters soundtrack for Bless the Beasts and the Children) also with Shorty Rogers.

The Delta Sweete is more successful, since it feels like a complete album, the tracks are mixed together and the album as a whole is a southern concept album. Gentry wrote 8 of the 12 songs, and she follows up the Ode to Billie Joe sound perfectly on songs like Okalona River Bottom Blues, Reunion, Mornin' Glory, Sermon, Penduli Pendulum, Jessye 'Lisabeth, Refractions, and Courtyard. You feel like you are sitting on the porch at Bobbie Gentry's house while she sings songs about her family and her neighbors.

She adds some great covers that stay true to her sound and aren't too syrupy or dated; with covers of Big Boss Man (a classic that Holly Golightly would also often do live), Parchman Farm Blues (Mose Alison song), Tobacco Road (John D Loudermilk song covered by many), and Louisiana Man (a Doug Kershaw song).

Local Gentry, which was recorded in London, has a more swinging London sound, and doesn't work quite as well. There are less Gentry originals (Sweete Peony, Casket Vignette, Ace Insurance Man, Recollection, and Sittin' Pretty) which are all great and follow-up on the sound she has been mining so well since her debut, but some ill-fitted Beatles covers weigh this album down. It sounds like someone put a gun to this southerner's head to make her sing Fool on the Hill, Eleanor Rigby, and Here, There and Everywhere.

On the plus side, her covers of Come Away Melinda (an early 60s topical folk tune), Papa's Medicine Show (a song written by Jamie Horton, who also recorded a version of Connie Francis' novelty Robot Man) and Peaceful (one of the highlights from Kenny Rankin's 1967 album Mind Dusters, one of many hard to find early Kenny Rankin albums, it's a tune probably best known recorded by Helen Reddy, but also covered by The Friends of Distinction, Georgie Fame, Percy Faith and Ray Conniff).

The bonus tracks are a nice touch: the groovy London vibe really pays off on her covers of The Classics IV's Stormy and Donovan's Skip Along Sam (which was also covered by The Sugar Shoppe, and interestingly, Kenny Rankin on his Family album) while Away in a Manger is nice for those who collect Christmas records.