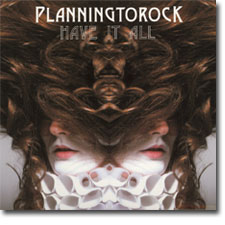 Planning To Rock is Janine Roston, from Berlin.

The music is off, kind of like the Boston band Phenomenological Boys combined with Angie Reed. There are hints of Kevin Blechdom, Pop-off Tuesday, and straight off ocapella.

The PTR show starts off the discs like a 50s song with layered voices and vibraphone.

Changes brings Planning To Rock into strange but fun territory, with odd voices and glockenspiel. This song is closest to Phenomenological Boys.

Local Foreigner is an interesting track that sounds like Chicks On Speed Records artist Angie Reed. The lyrics detail driving around the streets of Berlin.

I Wanna Bite Ya is my favorite track on the CD.

Despite having a few memorable songs, I wouldn't recommend buying this CD. It is an interesting record, but the songs are more interesting conceptually than musically.