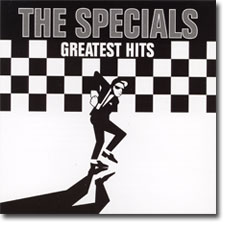 Produced by Oingo Boingo's John Avila, The Specials Greatest Hits contains tracks recorded recently (2003?) without Jerry Dammers (keys) or vocalist Terry Hall in the band, meaning that the so-called greatest hits offered on this CD are NOT the versions you know and love.

The recordings were made at Brando's Paradise, San Gabriel, California. Are these new recordings of classic Specials tracks? No information is given as to when these tracks were recorded. Fantastic Price Records is a budget priced subsidiary of Cleopatra Records. No extra info can be found on their website.

All of the vocals on this disc are performed by Neville Staple, a former roadie of the band who was recruited to play vocals and percussion as an early member of The Specials, later becoming a founding memberof Fun Boy Three. His toasting style vocals provided the counterpart to Terry Halls in classic Specials recordings.

The band is the same as was on the 'Ghost Town' CD, which came out in 2004 on the UK label Anagram. The band on this CD is

I found a review of a 2003 Specials show which shows the exact same band playing, so I think that this CD is a bit of a trick, and is not the CD you want to buy if you are interested in checking out The Specials.

The ARE a couple of decent versions. You're Wondering Now and It's You sound good to me. The new versions of Monkey Man and Ghost Town are good too, but I can still hear those superior original versions in my head...

The recordings on this CD sound more like a Specials cover band than the magic band we all loved called The Specials. The recordings are slick and well produced, but the vocals are just not the ones we know and love.