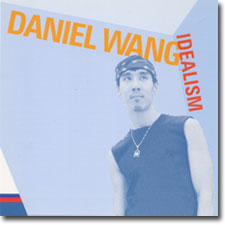 Daniel Wang's Idealism 2005 is a reissue of his debut album for Environ Records, released in 2001 which originally was a collection of Environ 12 inches. A couple of tracks have been re-recorded and a couple of 12 inch tracks from the Nocturnes 12 inch have been added as bonus tracks to Idealism 2005. This refurbished reissue has 11 originals and one cover of the Erroll Garner song Misty.

Daniel Wang had previously run the Balihu label releasing 12 inch singles throughout the 90s. He also was a part of Light Fantastic with DJ Cosmo and Nigel Hayes who released the Famous When Dead cd on the Playhouse label in 2001. And he has more recently released the Come On Let's Fly - A Special Disco Mix From Daniel Wang on the Japanese label Music Mine in 2005, which featured classic disco (some of it Japanese) mixed with more recent stuff (like Metro Area and his own group Light Fantastic).

Idealism 2005 has 3 tracks with vocoder vocals, and the rest is instrumental space disco jams, except for the change of pace cover of Misty which has piano (played by Erobique, aka Carsten Meyer from International Pony) and theremin.

My favorite tracks were the vocoder vocal tracks, which all reminded me of when Hakan Lidbo used that vocal style on the Data 80 project. Daniel Wang's music is more laidback space disco jams than Hakan Lidbo's, but there's a similar tongue-in-cheek feel to it. These tracks include Let's Go To Mars (which also has a reprise at the end of the album - before the bonus tracks), Islands, and Ambiguity. These tracks sound the most fully realized and don't waste their best moments early on.

Most of the other tracks here tend to tread water, mining the space disco jam sound, with playful retro synth lines, but no real stellar arrangements to shine the best light on them. I don't know if more vocals, or perhaps more collaboration would've made these tracks expand better. The end result is definitely some fine, listenable space disco, but there's a sameness that goes from track to track.

Environ Records in the gullbuy: