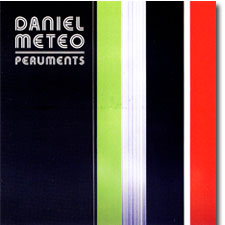 Daniel Meteo runs the label Meteosound, a division of the Berlin label Shitkatapult. He is known for combining bass heavy dub sounds into a Pole-like minimal electronic dub setting.

Peruments is his first album, and it is quite good. The record overall has a languid feel that may induce bouts of staring if you use it as headphone music while you work, but cranked up high at home or in a car this record will entertain.

The tracks are instrumentals with a bass heavy sound like Jah Wobble in PIL.

Without Don't It Ain't has a post-punk sound with the echoing sound of an agitated reverb coil. Chop Stich has this same feel, along with a snippet of someone saying a word (can't quite make out what) that is repeated as part of the rhythm. It is my personal favorite on the record.

Save Music has an electronic sound that closely approximates the sound of a reggae organ. The track is very close sounding to a Augutus Pablo, Lee Perry or Burning Spear dub. It's Maybe Late For You also has a traditional dub sound, in this case dues to the bass.

The title song Peruments adds an electronic sound like New Order Everythings Gone Green. It is the song that veers furthest from the reggae/dub sound most of the tracks have.

The use of natural instruments alsongside the glitchy electronic sounds gives this record an added dimension that couses it to rise obove the sameness that can sometimes effect Pole records. Peruments is a really solid album that I would recommend buying.

Daniel Meteo in the gullbuy: