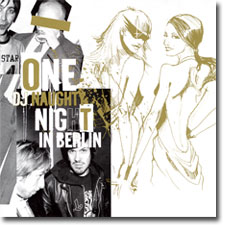 DJ Naughty is Filippo Moscatello. In 2000 he release the Disco Volante CD on International DeeJay Gigolo Records and became an early player in the sound that would grow to be called Electroclash.

One Naughty Night In Berlin is a mix he did for a club in Berlin. He does a lot of voiceovers on the tracks, and changes most of the tracks so that they become something other than they start out as. The voiceovers interfere with the record after you have listened to it a few times, in the same way Miss Kittin's voiceovers on her Radio Caroline, Vol.1 CD did.

I really like the Freestyle tracks he includes by Mary Jane Girls, Eleasnor Academia, and JM Silk. I also like the Sunburst Band track.

He pulls in some real choice tracks such as SF artist Patrick Cowley's Sea Hunt from his 1980 album Menergy. The track has wordless female vocals that flow as smoothly as the theme from Star Trek.

I did not enjoy Sweaty Balls, the track he recorded as Ruede Hagelstein.

Ponihoax have an interesting track with Budapest. The song has female vocals and a post-punk sound.

I have never heard any of the recent Gary Numan tracks. Sharpe & Numan's Change Your Mind fits well on the CD and is a pretty good match for DJ Naughty's style and the songs which bookend it.

One Naughty Night In Berlin is not a stellar album or a crucial buy, but it does have many interesting moments and is not boring or mundane.

DJ Naughty in the gullbuy: