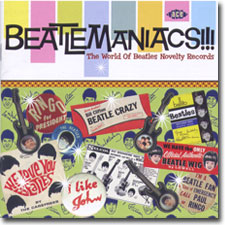 Beatles cover compilations are a dime a dozen, but the world of Beatles tributes and novelty records has only recently started appearing in cd compilations, with the likes of Better Than The Beatles on Knight Records (not to be confused with the Shaggs tribute, also called Better Than the Beatles) and now Beatlemaniacs!!! The World Of Beatles Novelty Records on Ace Records.

Beatlemaniacs is filled with tributes to the fab four in a variety of genres, including the girl group sound, girl folk, 60s psychedelia, beat music and doo-wop. Ace has even included a couple of covers (probably of artists they have cd compilations from). Some of the best, most exuberant, and compelling tributes come from the girl groups and girl folk singers. Many of these were one-offs or singers trying to make a break in the business.

Ace has also included a couple of covers to round out the compilation. You Can't Do That by Nilsson (from 1967) is a fitting cover to include since it also has snippets from 15 other Beatles songs masterfully written into this song. Please Please Me (Take 1) by Link Wray & The Raymen (unreleased until 2002), doesn't quite fit as well, since it's the only straight up cover here, but must also be included on an Ace compilation of Link Wray material.

Beatles tributes in the gullbuy: