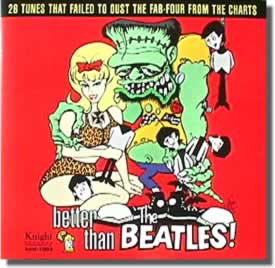 what a GREAT idea for a compilation!! find a ton of 'answer' songs to the BEATLES and put 'em all on one CD!

contrary to what most people believe, not EVERYONE liked the BEATLES when they first invaded america in 1964. in fact, many guys felt mighty threatened by the massive adoration their girlfriends suddenly bestowed upon the FAB FOUR.

many of these guys wrote and recorded songs in direct response to this affront. most, of course, date from 1964, when the invasion must have seemed quite a force to contend with indeed. though GARY USHER and beloved british harmony group TONY RIVERS & THE CASTAWAYS (the lone brits on this compilation) each have one cut on this CD, this album is by and large populated by impossibly obscure american bands.

in fact, i'm not really sure WHY the TONY RIVERS track is even included here, as it is NOT an 'answer' song like the rest. it must be present only because the song ( i love you --- the b-side to their 2nd single) has a sound that is so remarkable to that of the BEATLES of 1964. the pleasant surprise is that its almost as good as anything the FAB FOUR was putting out at the time!

the best way for me to describe this compilation is to quote some lyrics from a couple of the songs. this will probably give you the best idea of what you're dealing with here! from THE WEAVILS, a houston,TX band who recorded just one 45 (both sides are included here), we have 'we're the weavils' (track 2) which contains these lyrics: 'the beatles are good but we don't care, 'cause it only takes a minute to comb our hair!' and how about cleveland, OH band BOCKY & THE VISIONS, who on their song 'the spirit of '64' (track 7) ask the BEATLES to: 'move over, don't be so selfish---we did the twist and sang the shout long before you ever sung it out!'

okay, you get the idea. and if that's your bag, well, this whole CD is chock-full of such lyrics. i can't end this review without mentioning the very optimistically- named all-girl band THE BEATLE-ETTES who weigh in with their great response to BEATLEMANIA, 'only seventeen', from their lone 45. this is much more than just a novelty album, i think it really captures a bit of what it must have felt like to be in the midst of the BEATLE frenzy of 1964, and if this sounds like a fun album to you, then i highly recommend it